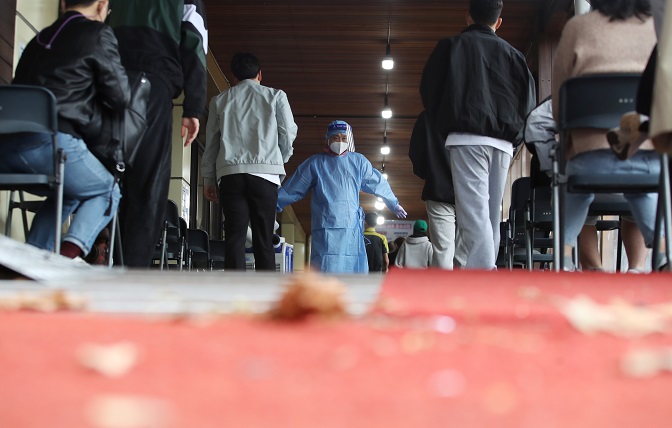 SEOUL, Oct. 12 (Korea Bizwire) — South Korea’s daily new COVID-19 cases hovered around the 1,000s for a fourth straight day on Tuesday due to fewer tests over an extended weekend.

The country added 1,347 more COVID-19 cases, including 1,334 local infections, raising the total caseload to 334,163, according to the Korea Disease Control and Prevention Agency (KDCA).

Health authorities are worried about a possible surge in confirmed cases as more cases are expected to be reported in the coming days after the extended weekend.

The prolonged weekend ended Monday, a substitute holiday for Hangeul Day on Oct. 9, which celebrates the proclamation of the Korean alphabet.

Later in the day, health authorities and local governments said 1,471 new cases had been confirmed as of 9 p.m. Tuesday, 197 more than at the same time Monday.

On Friday, the authorities plan to announce the country’s new social distancing rules, which will be the last before South Korea is set to adopt “living with COVID-19″ on Nov. 9.

Under the gradual shift plan, COVID-19 will be treated as an infectious respiratory disease, like seasonal influenza, with eased social distancing rules.

The greater Seoul area has been under Level 4 measures since mid-July, the highest level of the country’s social distancing rules, which includes a ban on private gatherings of six people, including two who have been fully vaccinated, after 6 p.m. 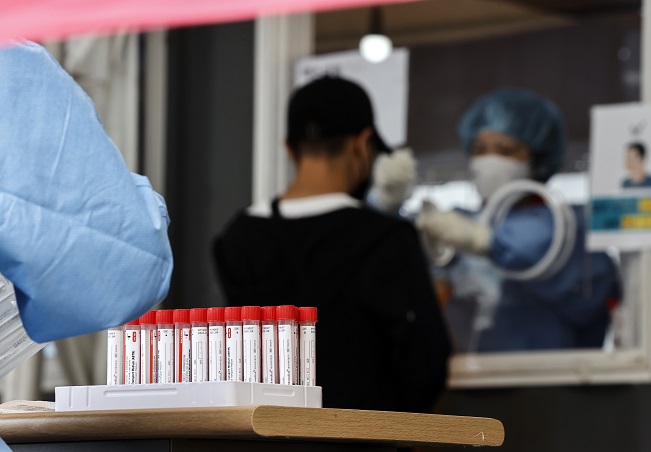 A health worker in a protective suit conducts a COVID-19 test at a makeshift clinic in Seoul on Oct. 11, 2021. (Yonhap)

Since the country began its inoculation campaign on Feb. 26, 40 million people, or 77.9 percent of the population, have received their first shots of COVID-19 vaccines, the KDCA said.

The number of fully vaccinated people stood at 30.6 million, or 59.6 percent.

Starting on Tuesday, additional vaccine jabs will be given to about 45,000 medical workers who were fully vaccinated six months ago, the authorities said.

The government has decided not to fine undocumented foreign workers if they leave the country after being fully vaccinated, in a bid to contain virus infections among them.

The number of patients with serious symptoms across the country reached 364, down from 371 the previous day, the KDCA said.

The total number of people released from quarantine after making full recoveries came to 299,260, up 1,238 from a day earlier.