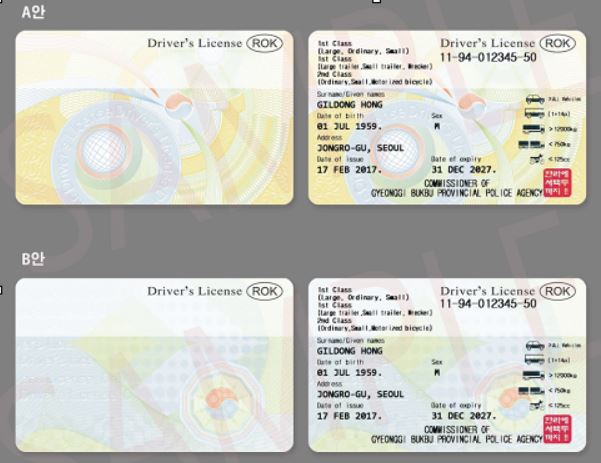 The English-language information on the back of a new South Korean driver’s license. (image: Korea Road Traffic Authority)

SEOUL, Jul. 15 (Korea Bizwire) — South Korea will start issuing a new type of driver’s license with personal information written in English on the back in September at the earliest, officials said Monday.

The nation’s current license has the driver’s information printed only in Korean on the front, obliging holders wanting to drive abroad to get an international driver’s license valid only for one year or have a foreign language translation of their licenses notarized.

According to the Korea Road Traffic Authority (KoRoad), the new license with the driver’s information in Korean on the front and in English on the rear will substitute for an international driver’s license in 35 countries worldwide, including Britain, Canada and Australia.

The English-language information on the new license includes the driver’s name, address and sex, as well as the issuing authority.

In addition, types of vehicles that can be operated by the license holder are displayed in accordance with international standards. It will also have various features to prevent forgery and alteration.

South Koreans with the new Korean-English driver’s license will be able to drive cars in 35 countries without any extra procedure, KoRoad said.

At present, South Korea-issued international driver’s licenses are recognized by 97 signatories to the Vienna Treaty.

Of them, 67 countries recognize a notarized translation of a South Korean driver’s license through bilateral agreements.

The Korean National Police Agency contacted the 67 countries, and 35 of them agreed by April 22 to recognize the new bilingual license, KoRoad officials said.