“Our party members and the people did not give me power but a responsibility to protect the lives of the people. It is an order to stand against the Park Geun-hye government. I will wage a full-out war with the government of President Park Geun-hye if it continues to ruins democracy and the livelihoods of ordinary people.”

“Now, President Park is deceiving the public with her campaign pledge to expand welfare without tax hikes. I will cut through to withdraw tax cuts for the rich, such as by normalizing the corporate tax rate. I will once again establish a fair tax system.”

“True national unity is not achieved by paying respects at a cemetery but when the perpetrators repent for their historical wrongdoing, offer their sincere apology to the people, comfort the victims, and the victims come to have a heart of forgiveness. I sincerely urge the Park Geun-hye government to take that path to true reconciliation and unity.”

- Moon Jae-in, chairman of the New Politics Alliance for Democracy 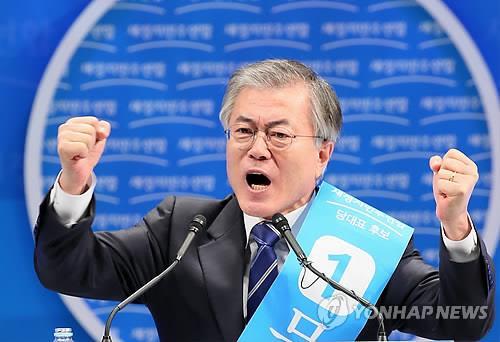 Rep. Moon Jae-in wins the race for chairman of the New Politics Alliance for Democracy (NPAD) in the party’s national convention held in Seoul on Feb. 8, 2015. (Image: Yonhap)

Moon Jae-in who was elected chairman of the New Politics Alliance for Democracy in a national convention on February 8 said that he would withdraw tax cuts for the rich by normalizing the corporate tax rate.

Since taking office in February 2013, the Park administration has been dogged by questions about whether it will be able to implement all of the expensive welfare projects she promised without raising taxes.

The government has come under fire in recent months for raising tobacco prices, pushing to reform civil service pensions and introducing a revised tax settlement scheme, all of which critics argue are designed to squeeze more money out of ordinary wage earners.

However, South Korea’s corporate tax rate on taxable income exceeding 20 billion won (US$18.2 million) was lowered from 25 percent to 22 percent during the preceding Lee Myung-bak administration.

Meanwhile, earlier in the day, Moon visited the National Cemetery in Seoul to pay tribute to late former presidents, including Presidents Rhee Syng-man and Park Chung-hee, the father of the current president. About 50 opposition lawmakers accompanied Moon on the visit.

It marked the first time that the opposition party’s leadership paid their respects to the late authoritarian leaders whose legacies still divide the Korean public.