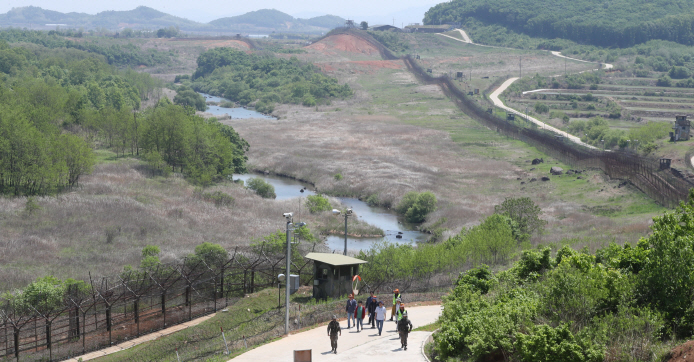 A trekking course of the DMZ Peace Trail in Cheorwon, Gangwon Province, on May 23, 2019. (Yonhap)

CHEORWON, May 23 (Korea Bizwire) — A 15-kilometer trail in Cheorwon, a landlocked county and symbolic border town, brings trekkers deep inside the Demilitarized Zone (DMZ), the forefront of 66 years of inter-Korean tensions where the two Koreas have begun to take nascent but concrete steps to build peace.

The first group of civilians is scheduled to set foot on the pathway in Cheorwon on June 1. The trail is the second of three “DMZ Peace Trails” along the off-limits military buffer zone, which are being opened to the public this year for the first time. The first trail in the east coast town of Goseong opened last month.

The border region of Cheorwon is today home to the middle section of the DMZ, a forested 4 km-wide buffer zone that runs the length of the border between the two Koreas.

Cheorwon is divided between North Korea in its upper corner and South Korea in the lower part, with its DMZ section in the middle containing a wild forest that has remained untouched since the 1950-53 Korean War, as well as military installations symbolic of the long-running inter-Korean tensions.

The three-hour guided trekking course starts at a historic hill, known as White Horse Hill, a site of one of the fiercest Korean War battles, where memorial stones stand today to commemorate war dead.

A brief bus ride from the starting point transports trekkers to the hill’s observation deck overlooking the thickly forested military buffer zone, preserved inside a network of barbed wire fencing.

The main part of the trek is an approximately 4 km walking path that runs along the southern border of the DMZ, near a volcanic stream, from the observation deck to a gateway into the DMZ. 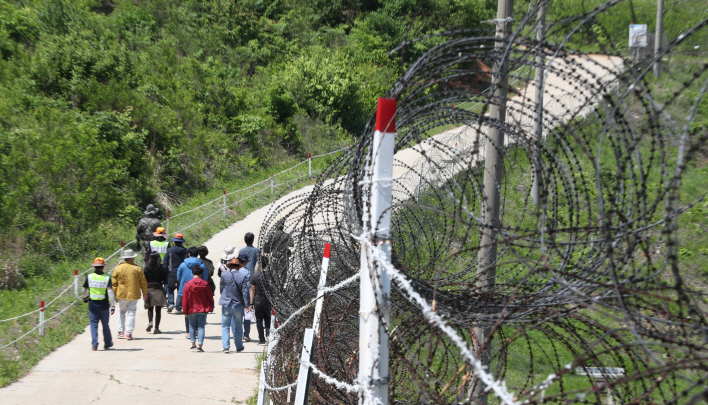 A trekking course of the DMZ Peace Trail in Cheorwon, Gangwon Province, on May 23, 2019. (Yonhap)

View-blocking trees were removed along the walking path for surveillance purposes, attesting to the decades of high security tensions in the area.

“If a forest is thick here, it will be hard to detect any suspicious movements with the naked eye or even with thermal sensors, so this region along the southern end of the DMZ underwent logging operations,” said Kim Mi-sook, a guide who walked a number of journalists along the trail on Wednesday ahead of its official opening to the public next month.

Still, inside the barbed wire fence is the rare natural ecosystem that remains untainted by the massive development drives of the past decades in the South.

“About 80 percent of state-designated natural heritage assets are those in the DMZ,” Kim said. “If you are lucky, we could come across water deer or wild pigs in springtime that trek (the DMZ) with their babies in tow.”

The DMZ is also a well-known winter home for some thousand cranes.

Following the trekking, the visitors are ushered back onto a bus to head to the trail’s final, most revealing destination of a military guard post inside the DMZ.

Trekkers’ mobile phones are temporarily confiscated as they go through a tight identity check before the bus passes through heavy iron gates, guarded by heavily armed soldiers, to the inside of the DMZ to stop at a military guard post atop another hill, known as Arrowhead Hill.

It is possibly the point closest to North Korea where civilians are allowed to go, with a rival North Korean guard post some 2 km ahead. Once opened, it will also be the first time since the Korean War that non-military visitors will be allowed on the front lines of the two countries’ war, which technically never ended.

The first civilian visits inside the DMZ mark a major tipping point in the history of the two Koreas marked by their division 66 years ago and continuing confrontations across the border ever since.

It was made possible following a landmark military deal between South and North Korea on the sidelines of the summit between President Moon Jae-in and Chairman Kim Jong-un in September last year.

A military guard post inside the middle section of the Demilitarized Zone in Cheorwon, Gangwon Province, on May 23, 2019. (Yonhap)

Under the peacemaking deal focused on diffusing hostility near the DMZ, the two countries brought down 10 of their heavily armed guard posts inside the DMZ last year.

The deal also selected the areas near Arrowhead Hill as the site for the two Koreas’ joint project to excavate remains of Korean as well as United Nations soldiers who were killed in action during the Korean War but remained buried anonymously after the areas became off-limits.

President Moon has since vowed to open up the DMZ to the public, and the first DMZ Peace Trail in Goseong was launched on April 27 to mark the first anniversary of Moon and Kim’s first summit.

The third trail spanning the western part of the border in Paju is also on its way to hosting civilian trekkers.

Despite the initial goodwill steps taken by the two Koreas, the trekking course inside the DMZ still shows clear signs of the potential for danger.

Even as trekkers are let into the guard posts, hundreds of military surveillance cameras will search the area for any signs of aggression.

“If there are any, the expedition will be immediately halted and the visitors will be evacuated right away,” Army Major Lee Jae-woo told reporters, indicating that both the nascent peace and risks of aggression coexist here.

As if to prove the point, personal defense gear such as bulletproof vests will be available for emergency use at the bus that transports the civilians.

The first trail course in Goseong was so popular among the public that the first 20 visitors were selected in a lottery, beating odds of one in 16.

Applications for the Cheorwon trail began on Monday at two government-run websites — www.dmz.go.kr and www.durunubi.kr — and the participants will also be selected through a lottery.

Two groups of 20 trekkers will be guided on the trail every day except on Tuesdays and Thursdays, accompanied by a professional guide, a couple of assistants as well as a vehicle with military personnel.