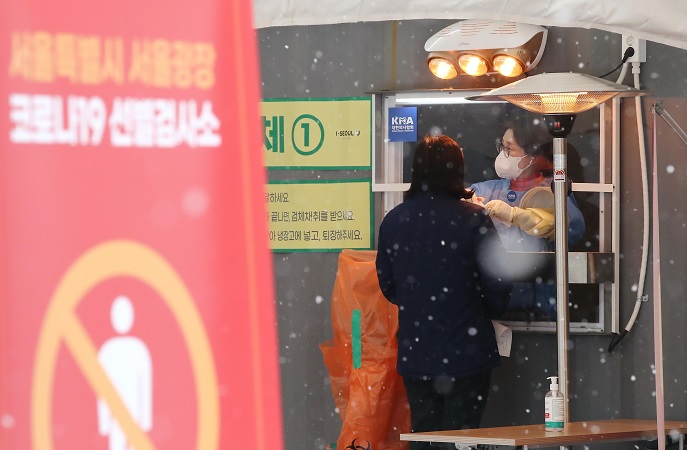 A health worker collects a sample from a citizen at a makeshift COVID-19 testing facility amid snowfall in Seoul on Jan. 18, 2021. (Yonhap)

The country added 389 more COVID-19 cases, including 366 local infections, raising the total caseload to 72,729, according to the Korea Disease Control and Prevention Agency (KDCA).

Monday’s daily figure marked a sharp fall from 520 posted a day earlier and is the smallest daily caseload since Nov. 25.

The third wave of COVID-19 here reached its peak on Dec. 25, with the daily tally reaching 1,240, but has been showing signs of a slowdown since. The daily figure has been staying in the 500s for the past six days.

“We hope this downward trend will continue and reduce virus cases stably,” Sohn Young-rae, a senior health official, said. “If that’s possible, we may be able to adjust our social distancing level after two weeks.”

Amid signs of a letup in new virus cases, health authorities decided to ease tough restrictions on previously shuttered or scaled back businesses that have suffered revenue losses.

The government announced Saturday it will extend its current social distancing level for another two weeks from Monday, though it eased some restrictions on cafes, gyms and other indoor facilities.

The ban on private gatherings of five or more people, and the restriction on business operations after 9 p.m., will also be extended.

The country designated Feb. 1-14 as a special antivirus period for the Lunar New Year, which falls on Feb. 12 this year.

Of the locally transmitted cases, the capital city of Seoul accounted for 128 cases, and the surrounding Gyeonggi Province took up 103.

Incheon, west of Seoul, had 13 new cases. The greater Seoul area accounts for around half of the nation’s 51 million population. 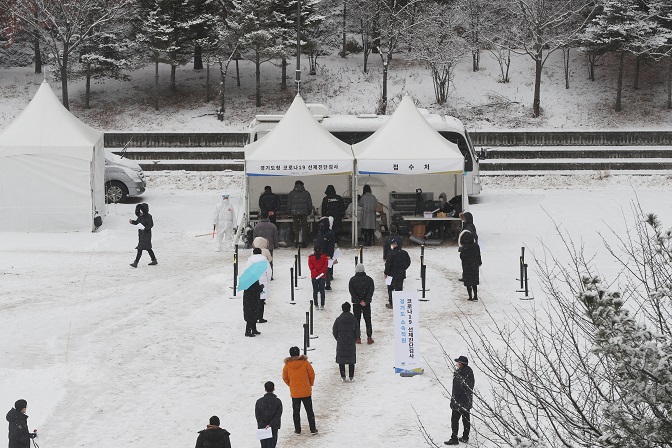 People wait in line to receive virus tests at a makeshift COVID-19 testing facility in Uijeongbu, north of Seoul, on Jan. 18, 2021. (Yonhap)

There were 23 cases from overseas, up three from a day ago, raising the total number of imported cases to 5,945.

Of the new imported cases, six were from the United States, followed by three from Indonesia.

Health authorities said they have so far confirmed 18 cases of new coronavirus variants after conducting whole-genome sequencing on 58 imported cases since October.

Of the confirmed variant cases, 15 were from Britain and two were from South Africa. One case was the Brazilian variant, the first such case here, according to the KDCA data.

The country reported 15 more fatalities, raising the virus death toll total to 1,264, according to the authorities. The fatality rate was 1.74 percent.

The number of seriously or critically ill COVID-19 patients came to 343, down nine from a day earlier.

The total number of people released from quarantine after making full recoveries was 58,723, up 470 from a day earlier, with 12,742 people isolated for COVID-19 treatment, down 96 from a day ago.

Later in the day, health authorities and local governments said 303 new cases were confirmed from 12 a.m. to 6 p.m. Monday, down from 331 posted over the same period on the previous day.

The newly added infections will be reflected on the daily figure to be released early Tuesday.

The greater Seoul area accounted for 72 percent, with the capital city finding 92 new patients, down from 121 from a day earlier. The decrease apparently followed fewer tests carried out over the weekend.

Regarding COVID-19 vaccinations in the country, the KDCA said a reservation system for inoculation will open in February.

“To reduce the fatality rate, I believe those who are highly prone to the virus should be vaccinated first instead of giving vaccines to people in their 30s or 40s,” KDCA chief Jeong Eun-kyeong said at a press briefing.

She said authorities will thoroughly discuss with experts the vaccination plan for elderly people following reports that more than 20 elderly people died in Norway after getting vaccinated with Pfizer’s COVID-19 vaccine.

Jeong added that the government has no plans of giving incentives or disadvantages to people regarding COVID-19 vaccinations. She said foreign residents in South Korea will also be subject to the country’s free vaccination program.