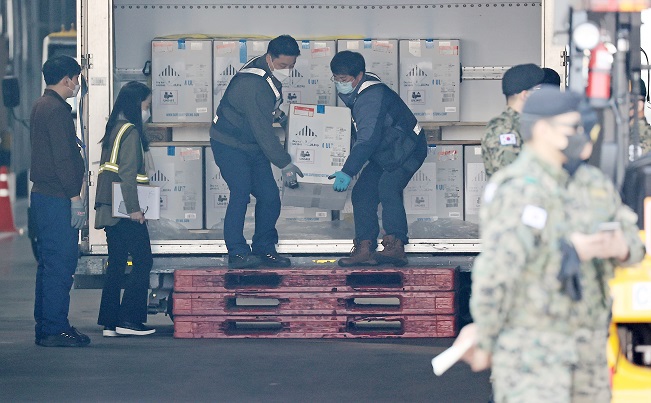 SEOUL, April 21 (Korea Bizwire) — South Korea’s daily new coronavirus cases bounced back to over 700 Wednesday as the country is ratcheting up efforts to boost vaccination rates amid growing concerns over another wave of the pandemic.

Wednesday’s daily caseload was sharply up from 532 cases on Monday and 549 cases on Tuesday. It is also the first time since last Wednesday that the daily tally has surpassed 700.

The average daily number of cases hovered above 600 in the past week on rising cluster infections across the nation as people increased their activities in spring, stoking concerns of another wave of the pandemic.

The country added four more deaths, raising the death toll to 1,806. The fatality rate was 1.56 percent.

As of 9 p.m. Wednesday, South Korea reported 650 new cases, down 27 from the same time Tuesday.

Daily cases, compiled by health authorities and local governments, are counted until midnight and announced the following morning. The greater Seoul area accounted for around 66 percent of the total.

South Korea decided to maintain the current level of social distancing rules through May 2 to contain the virus, while placing more restrictions on entertainment establishments, such as nightclubs and bars, but the country may adjust the alert level if infections continue to rise.

The KDCA said 60,597 people have been vaccinated with two doses. 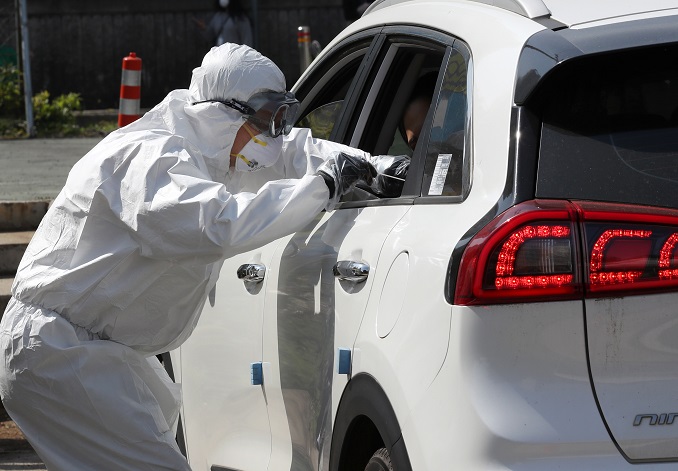 A health care worker conducts a COVID-19 test at a drive-through testing center in the southwestern city of Gwangju, 329 kilometers south of Seoul, on April 21, 2021. (Yonhap)

A total of 12,533 cases of side effects after vaccinations have been reported, up 138 from a day earlier, but 98.3 percent were mild symptoms, including muscle pain and fever.

A total of 51 deaths after vaccinations have been confirmed, according to the KDCA, up two from the previous day, although authorities have so far ruled out any link between the deaths and the vaccinations.

Health authorities are trying to speed up COVID-19 vaccinations to more people across the country, while seeking to secure stable vaccine supply.

On Tuesday, the Seoul government said it is looking at a “vaccine swap” agreement with the United States.

Pfizer vaccines for 125,000 people arrived here earlier in the day, which is part of a deal with the U.S. pharmaceutical firm. So far, a total of 1.75 million doses of Pfizer vaccines have been shipped in.

By the end of June, an additional 5.25 million doses of Pfizer vaccines are scheduled to arrive here.

Health authorities said they were in negotiations with Moderna to secure the company’s vaccines in the first half of the year amid tight vaccine supplies.

Authorities said they will also closely review data on Johnson & Johnson’s Janssen vaccine to determine who will receive the jabs, as the European Medicines Agency said the vaccine has possible links to rare blood clots.

South Korea has secured Janssen’s vaccines for 6 million people, but they have yet to be introduced in the country.

Of the newly locally transmitted cases, 449 cases came from the capital area, with 211 from Seoul, 225 from Gyeonggi Province and 13 from Incheon, 40 kilometers west of the capital.

Of the newly added imported cases, seven were from Russia followed by the United States and Kazakhstan with six each.

Health authorities are keeping especially close tabs on COVID-19 variants from overseas that are believed to be more contagious.

So far, they have confirmed 449 COVID-19 variant cases from Britain, South Africa and Brazil.

In addition to the three major COVID-19 variant strains, health authorities have identified 321 cases of “emerging” variants of the novel coronavirus since December, which includes nine cases of the Indian variant.

To curb the spread of virus variants, the country decided to extend a ban on passenger flights from Britain, which has been in place since Dec. 23, until May 6.

From Thursday, all arrivals from South Africa and Tanzania are required to stay at state-designated shelters for 14 days upon their entry into South Korea.

The KDCA data showed the number of seriously or critically ill COVID-19 patients was 116, up seven from the previous day.

The total number of people released from quarantine after making full recoveries was 105,877, up 650 from a day earlier, with 8,243 people being isolated for COVID-19 treatment, up 77 from a day ago.