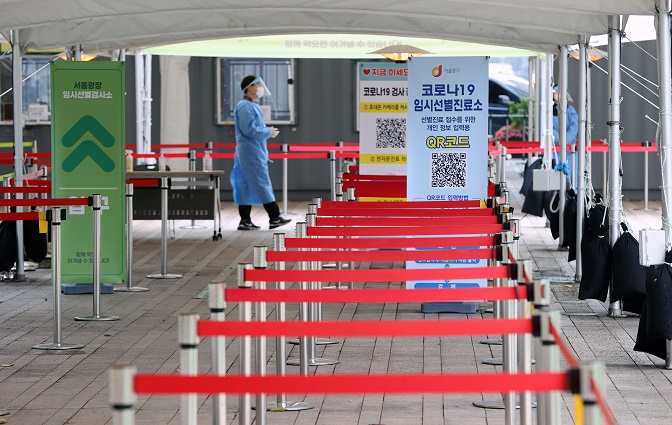 A testing station near Seoul City Hall is almost empty in this photo on Oct. 19, 2021, amid the country’s rising vaccination rate that the authorities say is starting to slow down the spread of the virus. (Yonhap)

SEOUL, Oct. 19 (Korea Bizwire) — South Korea’s daily coronavirus cases stayed below 2,000 for the 11th straight day Tuesday, as the effects of vaccines are taking hold with rising inoculations amid preparations for a gradual return to normalcy.

Tuesday’s tally is up from the 1,050 counted the previous day, which marked the lowest daily number since July 7, but down from Sunday’s 1,420 new cases.

The death toll came to 2,689, up by 21 from a day earlier. The latest deaths, the highest since July 7, mostly came from unvaccinated elderly people and included six breakthrough infection cases.

As of 9 p.m. Tuesday, health authorities and local governments had reported 1,501 more COVID-19 cases, up 462 cases from the same time Monday.

The slowdown in virus cases came as the country has seen a steady increase in the national vaccination rate that experts say appear to be showing effects.

As of Tuesday, 65.9 percent of the 52 million population were fully vaccinated and 78.8 percent had received their first shot. In early July, the full vaccination rate was about 10.6 percent.

“As the vaccinated population is increasing, it is blocking the spread of virus transmissions and resulting in preventive effects that bring down serious cases and the death rate,” Park Hyang, a senior health official, said at a regular briefing.

The weekly data also show a sharp decline in new cases. The average new COVID-19 cases for last week stood at 1,562, down by 398.6 from the previous week.

The full vaccinated rate is expected to reach over 70 percent by the end of this month, which has been considered a precondition for the gradual plan to put daily life back on track.

Health officials said another 2.678 million doses of Pfizer vaccines will arrive at Incheon International Airport on Wednesday. It is part of the 66 million doses the government agreed to buy from Pfizer under a direct contract. 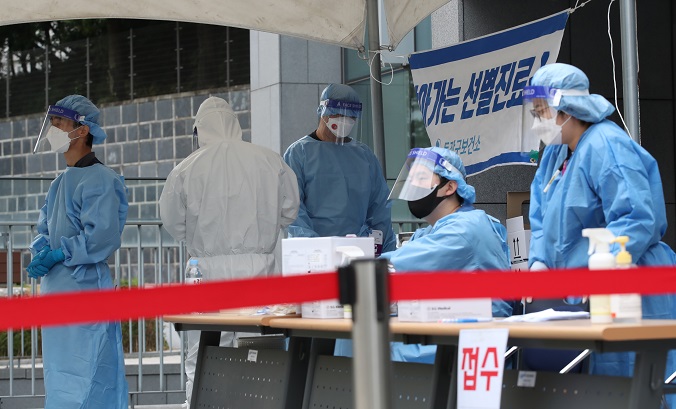 Officials work at a makeshift COVID-19 testing station set up at ChungAng University in Seoul on Oct. 18, 2021. (Yonhap)

A total of 87.4 million doses of COVID-19 vaccines have been distributed in the country so far. The government has secured 195.3 million doses of vaccines in total through direct contracts with vaccine makers or international vaccine procurement mechanisms.

South Koreans who have been vaccinated in foreign countries and arrived back home will be treated the same as those vaccinated here starting Wednesday, even without the documents required for “quarantine exemption” that would qualify them as vaccinated, health officials said.

It means the vaccinations that took place outside the country will be acknowledged equally. Until now, those who received the shots overseas needed to submit proof of documents to qualify as vaccinated.

The revised measure will entitle them to various vaccine incentives offered to people here, like eased private gathering rules and a mandatory quarantine exemption in case of coming into close contact with a COVID-19 patient.

But this does not exclude them from the two-week mandatory self-isolation upon arrival, officials said.

The restrictions on private gatherings have been lifted to allow up to eight people in the greater Seoul area since the beginning of this week, provided that four of them are fully vaccinated.

A maximum of 10 people, including six fully vaccinated, are allowed in other regions.

The eased rules will apply until the end of this month in what the authorities said would be the last adjustment of social distancing as the country is due to introduce the “living with COVID-19″ scheme.

Hong Jeong-ik, a KDCA official, said Tuesday the government plans to start booster shots for less immune people next month, and the booster shots will also be applied to those who were vaccinated overseas.

Twenty-five cases came from overseas, up by five from the previous day, with the United States accounting for the most with 12 cases. Four were from the Philippines, two from Russia and Japan, respectively, among the others.

The number of patients released from quarantine after making full recoveries stood at 313,432, up by 1,651 from the previous day, the KDCA said.