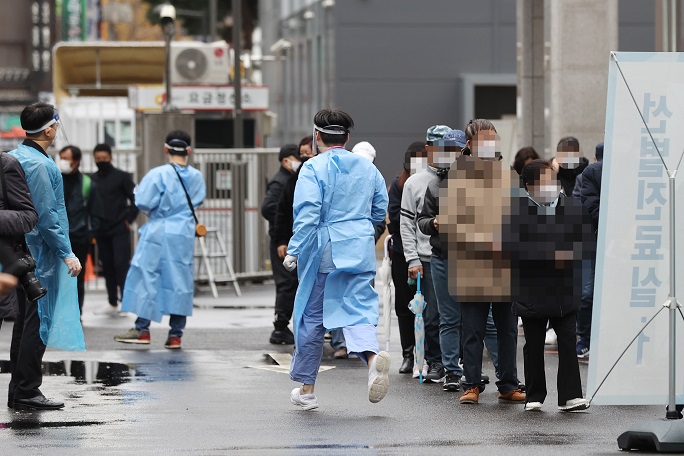 Health workers clad in protective gear prepare to work at a makeshift virus testing clinic in Seoul on Nov. 22, 2020.

SEOUL, Nov. 22 (Korea Bizwire) — The number of daily new coronavirus cases in South Korea exceeded 300 for the fifth straight day Sunday due to sporadic cluster infections across the country as health authorities decided to enforce tougher antivirus curbs to prevent another wave of the pandemic.

The country added 330 more COVID-19 cases, including 302 local infections, raising the total caseload to 30,733, according to the Korea Disease Control and Prevention Agency (KDCA).

The latest figure is down from 386 cases on Saturday, apparently due to less virus testing on the weekend, but health authorities are keeping their guard up.

The daily caseload has been staying in the triple digits since Nov. 8, with the figure surpassing 300 for the first time since late August on Wednesday with 313 cases.

Cluster infections from private gatherings, public facilities and hospitals continued to pile up across the nation, putting health authorities’ containment efforts in peril.

The state-run social distancing level was raised by one notch to Level 1.5 under a new five-tier scheme in the greater Seoul for two weeks Thursday to prevent another wave of virus infections.

On Sunday, health authorities decided to impose the Level 2 distancing, the third-highest in the country’s five-tier COVID-19 alert system, in the greater Seoul area from Tuesday through Dec. 7.

They previously hinted that the social distancing level in the Seoul metropolitan area can be elevated to Level 2 if the daily average number of virus cases in the region exceeds 200 in a one-week period.

The number of daily average virus cases in the capital region was 188.7 in the past seven days.

The authorities warned that the third wave of the virus outbreaks appears to be in progress in the greater Seoul area, home to half of the country’s population.

The city of Suncheon in South Jeolla Province and the county of Hadong in South Gyeongsang Province have already started to implement Level 2 social distancing as a precautionary move.

Under the Level 2 scheme, gatherings involving 100 or more people are banned, while some virus-prone facilities, including night clubs, need to suspend their businesses.

They warned that the country could see more than 600 virus cases daily in early December if the situation does not improve. 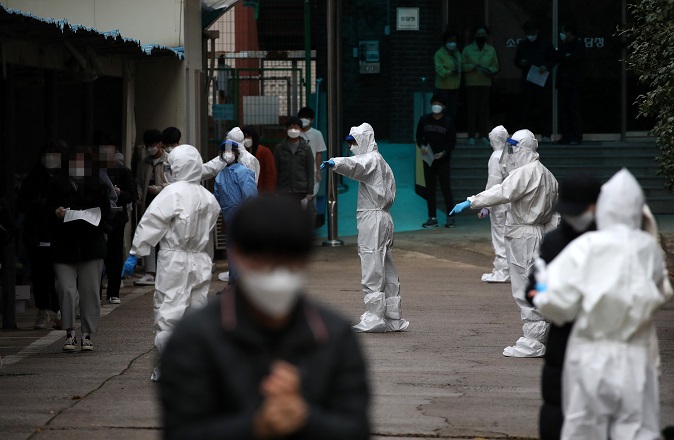 Health workers clad in protective gear guide students as they prepare to receive virus testing at a high school in Gwangju on Nov. 22, 2020, after one student tested positive for the novel coronavirus. (Yonhap)

Of the 302 locally transmitted cases, 219 were identified in the capital area. Seoul added 119 more cases, while the surrounding Gyeonggi Province and western port city of Incheon reported 74 and 26 cases, respectively.

It is also the first time since late August that the number of COVID-19 cases was above 200 for the third straight day in the capital region.

Among virus clusters, a cram school in Noryangjin, southern Seoul, added seven more cases, bringing the total to 76, while a high school in eastern Seoul reported 25 additional cases, raising its total to 34.

The number of cases connected to a student gathering at Yonsei University in western Seoul increased by five to 24.

The number of new imported cases came to 28, slightly up from 25 on the previous day.

Of the newly confirmed imported cases, 10 were from Russia, followed by eight from the United States and four from Indonesia. The total number of imported cases is now at 4,408.

The country reported two additional deaths from COVID-19, raising the total to 505. The fatality rate was 1.64 percent.

However, more deaths could be reported down the road as the number of seriously or critically ill COVID-19 patients came to 87, with 78 of them aged 60 or older.

The total number of people released from quarantine after making full recoveries stood at 26,466, up 101 from the previous day, with 3,762 people isolated for COVID-19 treatment, up 227 from a day ago.