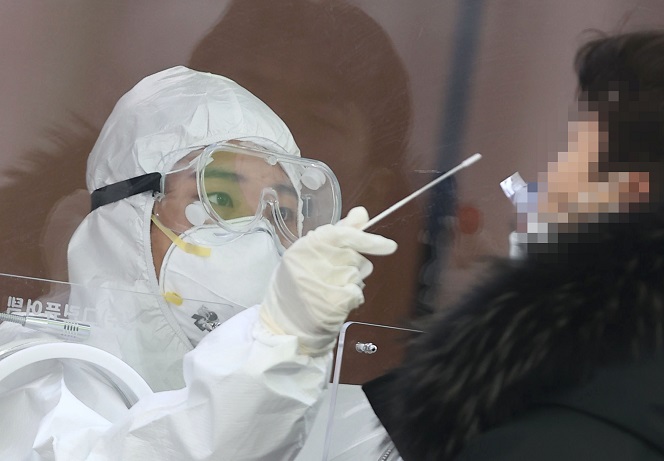 A health worker clad in a protective suit collects a sample from a citizen at a makeshift virus testing clinic in Seoul on Jan. 20, 2021. (Yonhap)

SEOUL, Jan. 20 (Korea Bizwire) — South Korea’s daily new coronavirus cases hovered around 400 for the third straight day Wednesday as the country struggles to further slow down the third wave of the pandemic with an enhanced social distancing scheme.

The country added 404 more COVID-19 cases, including 373 domestic infections, raising the total caseload to 73,518, according to the Korea Disease Control and Prevention Agency (KDCA).

Wednesday’s figure was slightly up from 386 cases reported the previous day.

Since the first confirmed case of the novel coronavirus a year ago, the country has experienced two waves of COVID-19 infections, with the first one centered in the southeastern city of Daegu in February and another massive outbreak in the greater Seoul area in August.

The daily figure stayed in the 500s in the past week before it dropped to a nearly two-month low of 389 on Monday.

As of 9 p.m. Wednesday, the country added 368 more cases, down nine from the same time Tuesday, according to the health authorities and local governments.

The capital area accounted for 278 new infections, with 135 in Gyeonggi Province, 120 in Seoul and 23 in Incheon, west of the capital.

Although new infections appear to be slowing down, health authorities have urged people to keep their guard up against possible upticks.

“We are not in a situation to ease our alertness against the virus,” Yoon Tae-ho, a senior health official, said.

Under the new measures, the capital area is under Level 2.5, the second highest in a five-tier system, and the rest of the nation remains under Level 2.

However, indoor gyms, cram schools and karaoke establishments are allowed to reopen on the condition that they strictly adhere to antivirus measures.

Health authorities said they will decide whether to lift the gathering ban after assessing the virus situation. 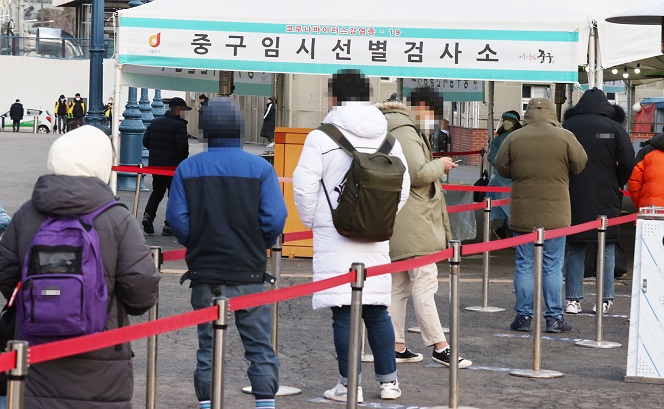 Citizens wait in line to receive virus tests at a makeshift virus testing clinic in Seoul on Jan. 20, 2021. (Yonhap)

Of the 373 locally transmitted cases announced early Wednesday, Seoul accounted for 135 cases, and the surrounding Gyeonggi Province took up 126.

Incheon, west of Seoul, had 14 new cases. The greater Seoul area accounts for around half of the nation’s 51 million population.

The number of cases linked to a nursing home in Gwangju rose by seven to 156, while infections tied to an evangelical church facility in Sangju, North Gyeongsang Province, reached at least 787.

Health authorities said virus infections at Dongbu Detention Center in southeastern Seoul reached 1,203 after the first case was reported there on Nov. 28. Of the confirmed cases, 1,176 were inmates at the correctional facility.

There were 31 cases from overseas, down four from a day ago, raising the total number of imported cases to 6,011.

Of the newly confirmed imported cases, 11 were from the United States, followed by Russia and Tanzania with four.

The country added 17 fatalities, down two from a day ago. The virus death toll reached 1,300. The fatality rate was 1.77 percent.

The number of seriously or critically ill COVID-19 patients came to 323, down 12 from a day earlier.

The total number of people released from quarantine after making full recoveries was 60,180, up 712 from a day earlier, with 12,038 people being isolated for COVID-19 treatment, down 325 from a day ago.