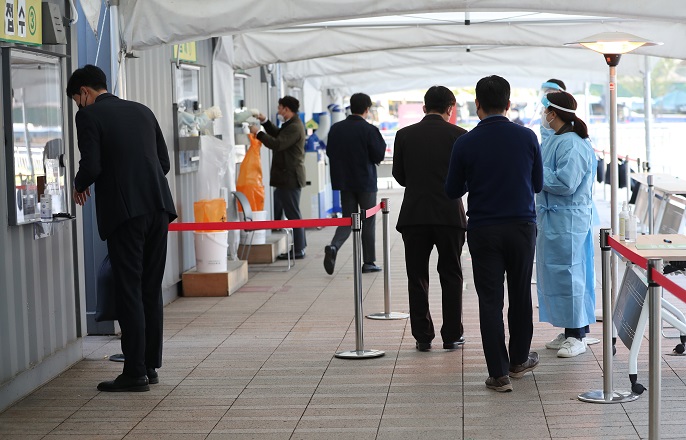 People take coronavirus tests at a clinic in front of City Hall in Seoul on Oct. 20, 2021. (Yonhap)

SEOUL, Oct. 21 (Korea Bizwire) — South Korea reported fewer than 1,500 daily cases Thursday, continuing a downward trend since the fourth wave of the pandemic peaked in late September, due to the accelerating rate of vaccinations.

Thursday’s tally is down by 130 from the 1,571 counted the previous day. It is also down by 498 from the number reported a week ago.

Although the country has reported over 1,000 coronavirus cases a day since early July, the pandemic is believed to be relatively under control as the country has ramped up its vaccination efforts.

Daily new cases have remained under 2,000 for 13 consecutive days. The average daily number of confirmed cases during the Oct. 10-16 period was 1,562, down 20.3 percent from the previous week, according to KDCA data released Wednesday.

As of 9 p.m. Thursday, health authorities and local governments had reported 1,368 more COVID-19 cases, up 112 from the same time a day earlier.

The number of patients released from quarantine after making full recoveries stood at 317,755, up by 1,148 from the previous day, the KDCA said. 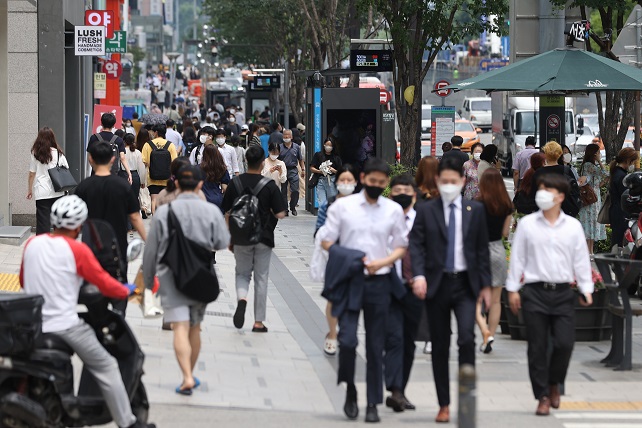 People walk on the street in Seoul in this undated file photo. (Yonhap)

As of Thursday, 67.4 percent of the 52 million population were fully vaccinated, while 79 percent had received their first shots.

Health authorities expect the country to fully vaccinate over 70 percent of its population by the end of this month.

With accelerating inoculations, South Korea is slowly inching toward normality, like many other nations around the world.

Beginning this week, the restrictions on private gatherings have been lifted to allow up to eight people in Seoul and its surrounding areas to meet, provided that four of them are fully vaccinated.

The eased rules will be in effect until the end of this month in what the authorities said would be the last adjustment of social distancing as the country is set to introduce the “living with COVID-19″ scheme.

As part of the preparation, a public hearing on the scheme is slated for next Monday with medical and infectious disease experts sharing notes on the gradual plan to live with the coronavirus.

A debate session is also scheduled to take place Friday ahead of the planned hearing, according to the health authorities.