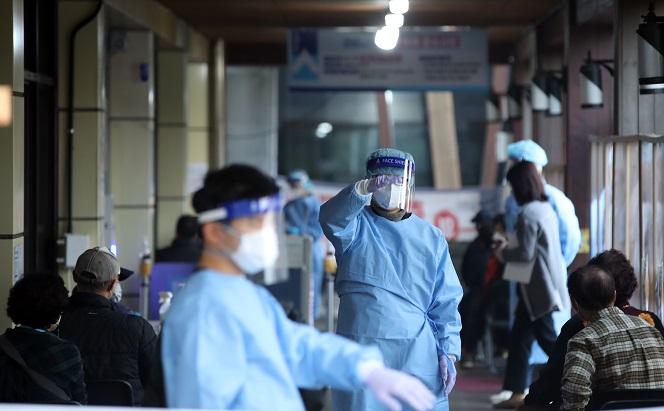 SEOUL, Oct. 27 (Korea Bizwire) — South Korea’s new coronavirus cases soared to nearly 2,000 on Wednesday, as fresh concerns emerge over people letting their guard down ahead of the start of a gradual easing of virus curbs aimed at returning to normalcy.

The country added 1,952 more COVID-19 cases, including 1,930 local infections, raising the total caseload to 356,305, according to the Korea Disease Control and Prevention Agency (KDCA).

The latest count is a big jump from the previous day’s 1,266 and 1,190 reported on Monday, although the daily caseload remained below 2,000 for the 19th straight day.

The daily infection tally has stayed in the quadruple digits since July 7, including the record high of 3,272 cases on Sept. 25.

As of 9 p.m. Wednesday, health authorities and local governments had reported 1,928 new COVID-19 cases, up 73 from the same time Tuesday.

Wednesday’s hike in the daily cases came amid growing concerns that people might be lowering their guard too soon with the planned shift to the “living with COVID-19″ scheme on Nov. 1.

Health authorities said the recent relaxation of some COVID-19 rules, which came as an interim step before implementing the new scheme, may have caused the caseload to rise.

Since Oct. 18, people have been allowed to gather in groups of up to eight in the greater Seoul area, and up to 10 in non-metropolitan regions. Business hours for some multiuse facilities, like study rooms and movie theaters, have been extended to midnight. 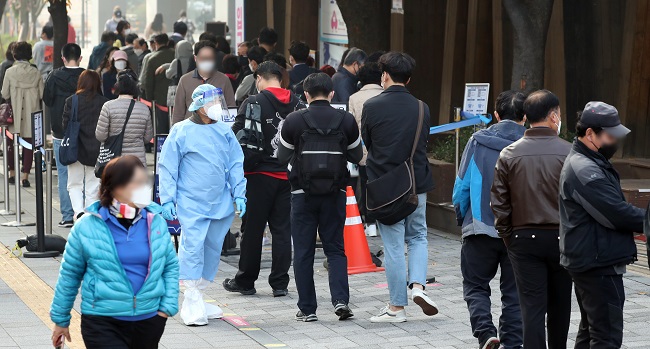 A COVID-19 testing station in Seoul’s eastern district of Songpa is crowded with people lined up for diagnostic tests on Oct. 27, 2021, as South Korea reported a jump in the daily caseload to nearly 2,000, ahead of the start of a new scheme aimed at a gradual lifting of virus curbs. (Yonhap)

“As expectations over the return to normal daily life grow, we have seen an increase in movement and activities,” Sohn Young-rae, a senior health official said in a briefing.

“Also there is the ventilation issue associated with the fact that these activities are taking place more indoors than the outside due to the weather change,” Sohn said.

Sohn warned of yet another potential spike in infections as many Halloween celebrations are expected over the rest of this week, especially among the expat communities.

“We will check the popular hangouts frequented by young people,” he said.

Under the upcoming new scheme, the virus restrictions will be lifted in phases through the end of January next year, starting off with allowing cafes, restaurants and other multiuse facilities to operate 24 hours and private gatherings of up to 10 people, regardless of vaccination.

But basic preventive measures will stay in effect, like wearing masks indoors.

About 40.89 million people, or 79.6 percent of the country’s 52 million population, had received their first COVID-19 vaccine shots as of Tuesday. The number of fully vaccinated people came to 36.71 million, or 71.5 percent.

Health officials said 19,954, or 0.074 percent of 26.93 million people vaccinated in South Korea are estimated to have been infected as “breakthrough” cases, many of whom were in their 30s, officials said.

The cumulative tally on virus variants came to 46,417 cases, with the delta variant accounting for all but one.

Of the locally transmitted cases reported Wednesday, Seoul had 729 cases, with the surrounding Gyeonggi Province logging 740 cases and Incheon, west of Seoul, 125 cases.

Twenty-two cases came from overseas, putting the cumulative total at 15,025.

The total number of people released from quarantine after making full recoveries came to 329,658, up by 2,066 from a day earlier, the KDCA said.