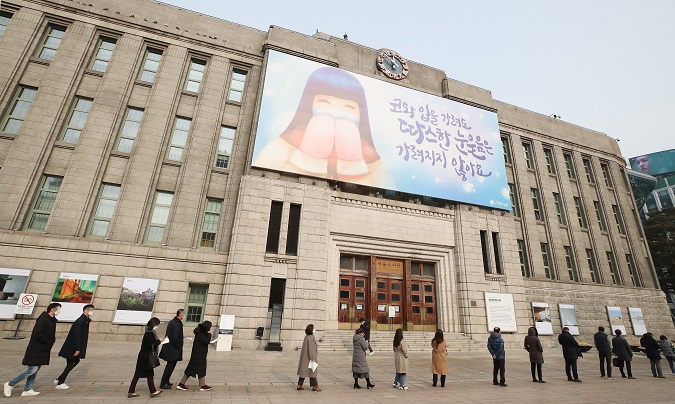 People line up to receive coronavirus tests at a makeshift clinic in Seoul on Dec. 23, 2020. South Korea’s daily new coronavirus cases rose to above 1,000 for the first time in three days the same day. (Yonhap)

SEOUL, Dec. 23 (Korea Bizwire) — South Korea’s daily new coronavirus cases rose to above 1,000 for the first time in three days Wednesday, as the nation imposed the most stringent social distancing rules so far to contain the winter wave of the virus.

The country added 1,092 more COVID-19 cases, including 1,060 local infections, raising the total caseload to 52,550, according to the Korea Disease Control and Prevention Agency (KDCA).

It was the second-highest one-day tally of confirmed cases since the pandemic began.

Seventeen people died from COVID-19 in the past 24 hours, raising the death toll to 739.

The country is expected to report around 1,000 new daily cases on Thursday morning, as 911 new cases were confirmed as of 9 p.m. Wednesday, 73 fewer than at the same time on Tuesday, according to health authorities and local governments.

The greater Seoul area accounted for 69.9 percent with 637 cases.

Health authorities have been considering whether to raise the country’s social distancing guidelines to Level 3, the highest in its five-tier scheme.

However, authorities said they are aiming to contain the current wave of the pandemic without raising virus curbs to Level 3 on concerns over the impact on the economy.

Instead of applying measures that would deal a severe blow to millions of small merchants, health authorities have deployed “targeted” virus curbs.

The strongest-ever measures will be applied nationwide starting Thursday as well.

Ski resorts and famous tourism venues will be shut down to slow the spread of the virus during the Christmas and New Year’s holiday season.

A new variant of COVID-19, believed to spread faster, in Britain has prompted countries in Europe and Asia to suspend flights from London.

South Korea will also temporarily halt all flights from Britain from Wednesday until Dec. 31, Yoon Tae-ho, a senior official at the health ministry, said.

All travelers from Britain will be quarantined for two weeks. When they are released from quarantine, they will undergo a more accurate virus test called the Polymerase Chain Reaction test, according to the ministry.

To help find unconfirmed infections with no symptoms, the authorities have expanded anonymous testing since Dec. 14. A total of 754 infections, including 145 cases in the past 14 hours, have been confirmed through such testing so far, the KDCA said.

South Korea has been applying Level 2.5 social distancing rules in the greater Seoul area, home to half of its 51.6 million population, and Level 2 rules in the rest of the country. 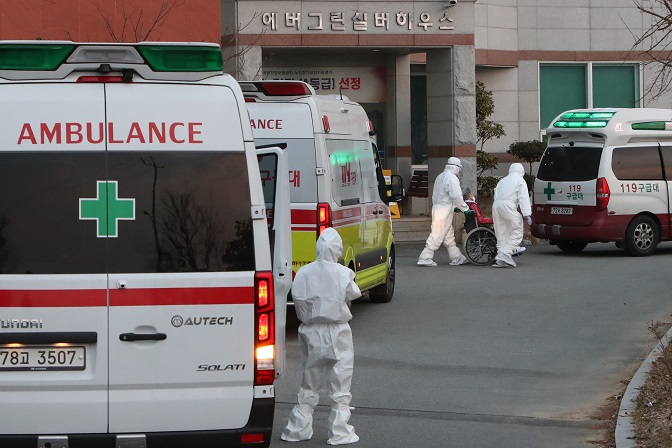 A COVID-19 patient is loaded into an ambulance at a nursing home in the southwestern city of Gwangju on Dec. 22, 2020, to be transported to a nearby hospital. Twelve residents and four workers have been diagnosed with the new coronavirus at the facility. (Yonhap)

Of the 1,060 newly identified local infections announced early Wednesday, 373 cases were reported in Seoul and 299 cases in Gyeonggi Province that surrounds the capital. Incheon, west of Seoul, reported 46 more cases.

Clusters of virus infections kept growing across the nation, although about 70 percent of new cases came from the greater Seoul area.

Other major cluster infections included a nursing home in Cheongju, which added 8 more patients, raising the total to 79. A religious facility on the southern island of Jeju has reported 119 patients.

The number of seriously or critically ill COVID-19 patients reached 284, compared with 281 from the previous day.

The total number of people released from quarantine after making full recoveries stood at 36,726, up 798 from the previous day.

The country, meanwhile, added 32 imported cases, increasing the total to 5,193. Nine cases came from Indonesia, followed by six cases from the United States and five from Russia.