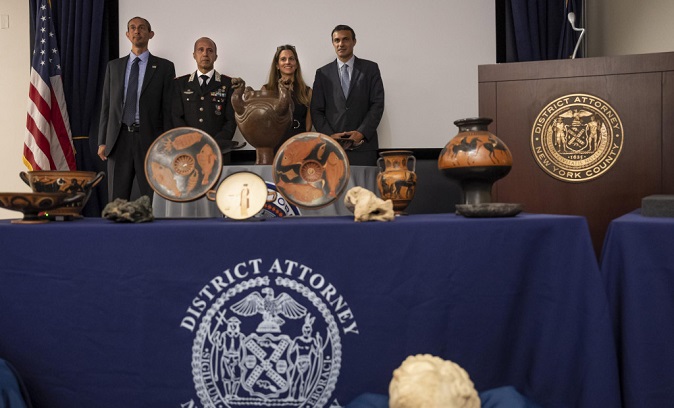 NEW YORK, Sept. 7 (Korea Bizwire) — New York has returned to Italy 58 antiquities valued at nearly $19 million. The artifacts, illegally stolen from the Italian territory, were recovered thanks to the cooperation between the judicial authorities of New York and the Cultural Heritage Protection Command of the Italian Carabinieri. The Consul General in New York, Fabrizio Di Michele, and General Roberto Riccardi, of the Carabinieri Command for the Protection of Cultural Heritage were present at the restitution ceremony, which took place at the office of Manhattan District Attorney, Alvin Bragg.

“This new restitution of archaeological assets of great value is proof of the extraordinary results that the collaboration between Italy and the United States in the sector of combating the illicit trafficking of artifacts and works of art has continued to produce for over twenty years. Our Countries firmly believe in the value of the protection of cultural heritage, at the center of a joint activity that makes us very proud,” remarked the Ambassador of Italy to the United States, Mariangela Zappia.

“The artifacts recovered today are of immense historical and artistic importance,” commented the Consul General Di Michele. “This repatriation operation follows two other similar operations recently concluded with the New York District Attorney. In the last nine months alone, over 400 works of art have been returned to our country.”

The returned goods, which cover a large period of time ranging from 1100 BC to 300 AD, of which 21 works from the collections of the Met, were formally delivered to Consul General Di Michele, in the presence of the Executive Assistant District Attorney of New York County Lisa Delpizzo and General Riccardi. “Yet another opportunity to thank the US authorities for the generous collaboration offered to the recovery of cultural heritage,” Riccardi observed. “Once again, thanks to the synergies created with the Trafficking Unit of the DAO of Manhattan and the Homeland Security Investigations, with the good offices of Italian diplomacy, we bring home objects that belong to our history, identity and culture,” concluded the general, thanking his American colleagues.

A photo accompanying this announcement is available at https://www.globenewswire.com/NewsRoom/AttachmentNg/91489e3e-f270-4c67-be10-515d398dae89