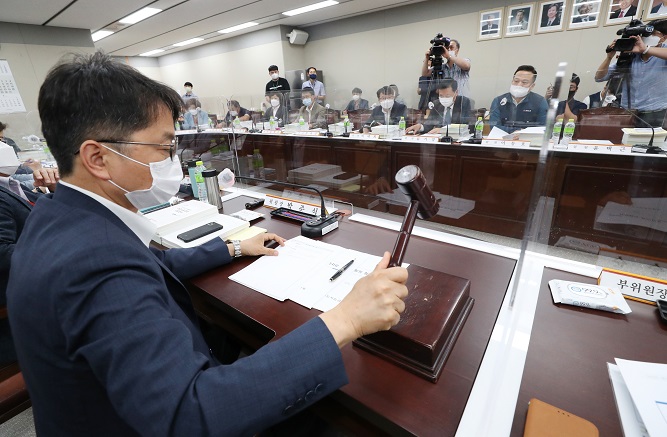 This photo shows Park Joon-shik, chairman of the Minimum Wage Commission, banging the gavel during a plenary session at the government complex in Sejong on July 13, 2020. (Yonhap)

SEJONG/SEOUL, July 14 (Korea Bizwire) — A national commission on Tuesday set next year’s minimum hourly wage at 8,720 won (US$7.25), raising the legal threshold by the smallest-ever annual increase, as the country faces economic headwinds from the new coronavirus.

Up to 4 million workers, whose current hourly wage is lower than the amount, will be affected by the decision to raise the minimum wage by 1.5 percent, the Minimum Wage Commission said in a statement.

The decision came in the early hours of the day during the commission’s ninth plenary meeting, which is comprised of nine members each from all three sides — employers, employees and those representing social interests.

The increase is lower than last year’s 2.9 percent and is the smallest since the minimum wage was first introduced in 1988. The next smallest was 2.7 percent during the financial crisis in 1998.

This year’s negotiations were particularly tough due to the economic difficulties stemming from the coronavirus pandemic.

Economic think tanks and the central bank have slashed growth outlooks for Asia’s fourth-largest economy. At the same time, workers whose income is directly linked to the minimum wage have been directly hit by the pandemic.

While labor unions stressed the importance of ensuring that low-income workers meet their basic needs, employers called for easing the financial burden on businesses. 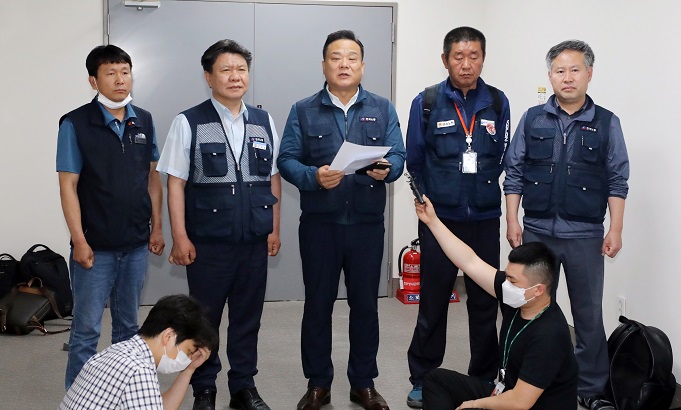 Panel members recommended by the Federation of Korean Trade Unions, who attended the Minimum Wage Commission’s ninth plenary meeting at the government complex in Sejong, announce their exit on July 14, 2020. (Yonhap)

Tuesday’s decision appeared to be in favor of small- and medium-sized businesses as well as mom-and-pop stores.

The new minimum wage was proposed by those commissioners representing social interests after employers and employees failed to bridge their gap.

The figure was drawn based on a 0.1 percent growth outlook for 2020, a 0.4 percent consumer price increase outlook for 2020 and a 1 percent hike factoring in the need to improve the livelihood of workers, according to the panel.

The proposal passed by a vote of 9-7. The vote was attended by seven employer commissioners and nine public interest commissioners.

Seven other panel members at the meeting, including all five recommended by the Federation of Korean Trade Unions, left the session in protest of the proposal.

The four remaining members, affiliated with the Korean Confederation of Trade Unions, did not attend the meeting.

Labor and business organizations showed mixed reactions to the decision.

“Compared with views that the (country) is successfully coping with the new coronavirus, 1.5 percent is a shamefully miserable figure that is not ‘the lowest’ (increase rate) but the ‘worst’,” the Federation of Korean Trade Unions said in a statement.

It also called the 1 percent hike, factoring in the need to improve the livelihood of workers, as an “utterly low” figure, based on “arbitrary interpretation.” 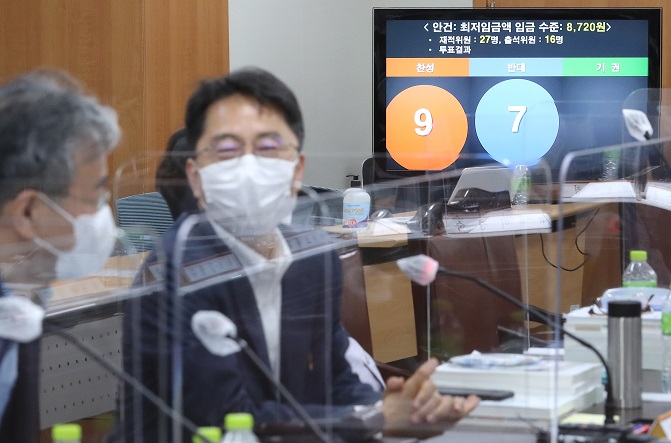 This photo shows members of the Minimum Wage Commission after their ninth plenary meeting at the government complex in Sejong on July 14, 2020. (Yonhap)

The Korean Women’s Trade Union said the adjustment of the minimum wage was much too low and that the agreement was beyond disappointing.

“The slight increase in the minimum wage goes against the current situation of trying to raise the wages of low-income workers so as to narrow the income gap widened by the ongoing coronavirus pandemic,” the union said.

“Even if the increase rate is one of the lowest, the business circle feels regretful, and it is not easy to accept since there seems to be no end to the financial difficulties coming from the virus pandemic,” said Park Jae-keun, an official at the Korea Chamber of Commerce and Industry.

“Nonetheless, we accept the commission’s decision and respect it,” he said.