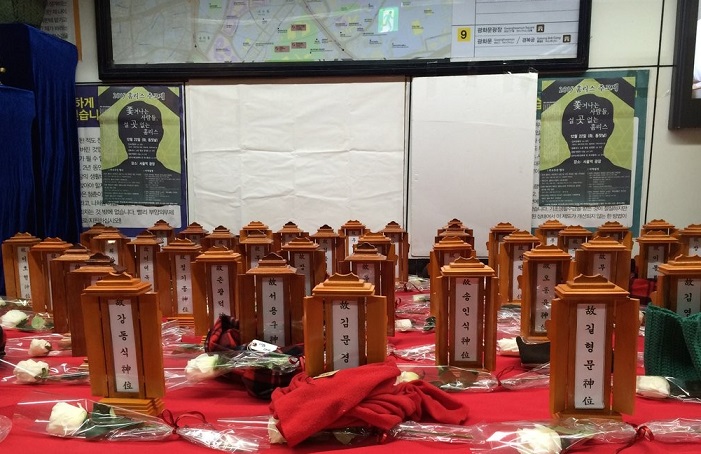 Memorial tablets for the dead who were homeless or disconnected from their families are lined up at a temporary altar at Gwanghwamun subway station in downtown Seoul on Dec. 14, 2015. (Yonhap)

SEOUL, March 29 (Korea Bizwire) — The number of deaths occurring in which the deceased has no known family or friends is steadily increasing year after year in South Korea.

Such deaths also include cases in which known family or friends refuse or avoid their claim to them due to social or economic inabilities or the severance of family relations.

However, it has been noted that such a figure might be inaccurate or not representative of the real situation.

Good Nanum, a civic group that offers free funeral service for those who die with no known family, estimated that the number of such deaths stood at 665 last year in Seoul, far higher than 561, a number compiled by the ministry.

The situation is similar in other regions.

“There are no official government-level statistics. We’re now compiling the statistics by collecting data from municipal governments, but the reliability of the data is questionable.” said Park Jin-ok, managing director of the civic group.