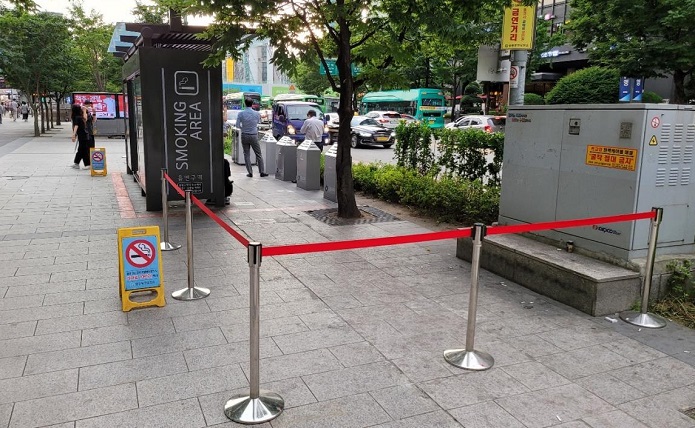 An outdoor smoking booth in Yeouido, Seoul that resumed operations on July 15, 2021. The photo was taken a day later.(Yonhap)

SEOUL, July 19 (Korea Bizwire) — After having been shut down since the rapid spread of COVID-19, the public outdoor smoking booths in the financial district of Yeouido in Seoul are open once again.

Starting from Thursday afternoon, the Yeongdeungpo District Office, which has jurisdiction over Yeouido, resumed the operation of seven outdoor smoking booths around the island that were tentatively shut down last week.

To address the congestion problem within the booths, the district office expanded the smoking spaces by installing temporary fences around the booths.

The district office assigned exclusive staff to supervise the violation of social distancing and disinfection rules within the smoking booths as well as to minimize possible interference with non-smokers.

The smoking booths that resumed operations after being remodeled looked far less congested than they were before.

Particularly in the smoking zones where city workers have been assigned, there were almost no smokers who smoked outside the booths or spit on the floors.

“After the public outdoor smoking booths resumed operations, however, the lopsided situation of the smokers has greatly improved.”