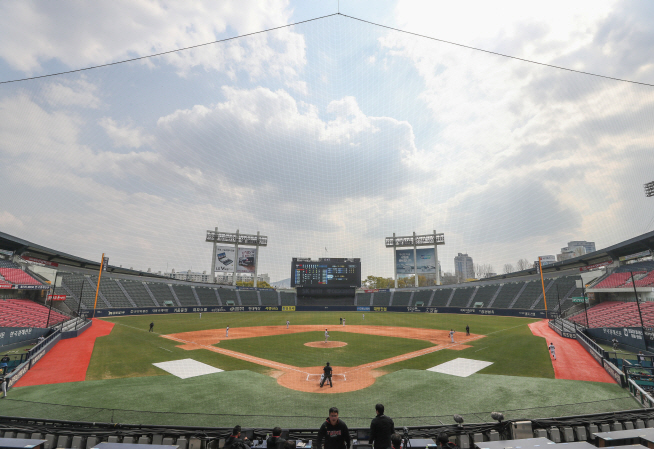 SEOUL, April 17 (Korea Bizwire) — There’s no crying in baseball. And once the South Korean baseball league begins its regular season, there’ll be no spitting either.

The Korea Baseball Organization (KBO) unveiled a manual for its 10 clubs on the coronavirus pandemic, including do’s and don’ts at the ballpark during the upcoming preseason and regular season.

The virus outbreak forced the KBO to cancel its original, March 14-24 preseason and to postpone March 28 Opening Day.

With the number of new cases in steady decline this month, the league has scheduled 20 preseason games beginning next Tuesday through April 27, and it’s expected to announce a new regular season start date next Tuesday.

Its goal is to start the season in early May and play a full, 144-game schedule.

And to prevent infection during the upcoming preseason, the KBO said all players and team officials must minimize contact with outside visitors.

Players must have their temperature checked twice before games and fill out daily health questionnaires on a KBO app specifically built for this purpose.

They’ll be “strongly recommended” to wear masks in the clubhouse and in all areas of the stadium during games, except for the field and the dugout.

High-fives and handshakes with bare hands will be discouraged, and spitting will be “strictly prohibited.”

All umpires must wear masks and plastic gloves, and they will be banned from making any physical contact with players.

Front office employees, trainers and interpreters who travel with teams, bat boys and video replay officials will also be required to don masks and gloves.

If a player shows symptoms of COVID-19 during the preseason or regular season, the player will be immediately quarantined, and the stadium where his team last played will be closed for at least two days.

And if he tests positive for the virus, a government-appointed epidemiologist will conduct contact tracing and determine others who will be ordered into two-week quarantine.

The KBO will not immediately halt play in such an instance, and it will instead hold a meeting with team executives to explore that possibility, depending on the extent of the ailing player’s contact with others in the league.