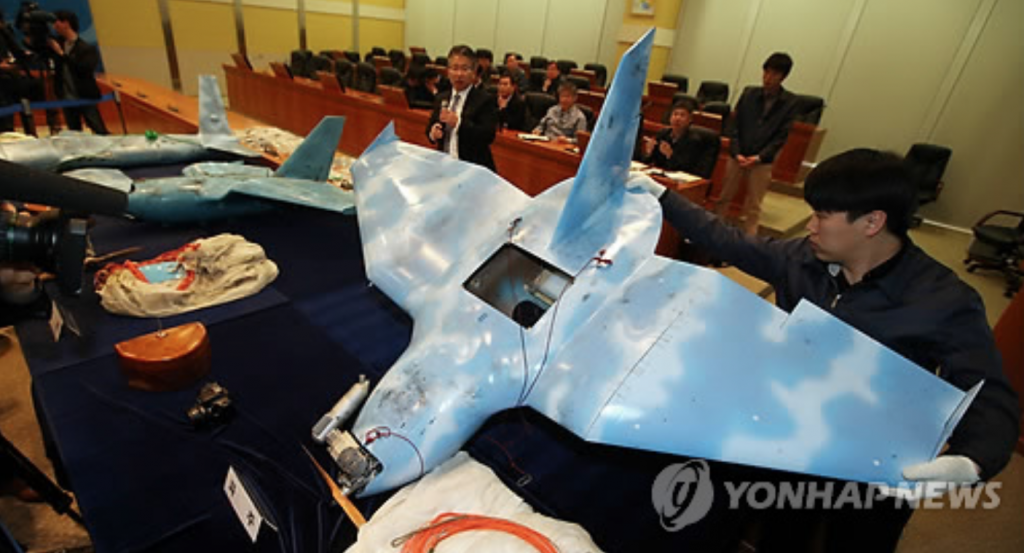 This photo taken on April 11, 2014, shows three drones which North Korea was presumed to send to South Korea for spying purposes. (image: Yonhap)

North Korea is focusing on developing drones in a bid to make up for the inferiority of the country’s air forces and better conduct reconnaissance, Chung Ku-youn, a research fellow at the Korea Institute for National Unification, said in a report.

“North Korea’s air forces are inferior to its South Korean counterpart and an absence of military satellites is making it difficult for Pyongyang to reconnoiter (the South),” the report said.

Chung expressed concerns about North Korea’s possible use of drones for terrorist attacks or provocations.

North Korea may seek to put chemical or biological weapons on drones to carry out far-away attacks, the report said.

North Korea is presumed to possess about 25 chemical agents including six nerve agents such as sarin and VX, according to a 2016 report by the Korea Institute for Defense Analyses. The country is not a signatory to the Chemical Weapons Convention.

Pyongyang is estimated to also have 13 types of pathogens such as anthrax and clostridium botulinum that can be used as biologic weapons, it said. In 1987, the country became a signatory to the Biological Weapons Convention.

Since the early 1990s, North Korea is estimated to have been developing various versions of drones, called Banghyun.

Given the level of technology, North Korean drones are projected to fly at an maximum speed of 162 kilometers per hour with an capacity to carry about 20-25 kilogram payloads, the report said.

North Korea has recently developed a large stealth drone “Banghyun 5″ that can carry explosive devices and radioactive materials, Kim Heung-Kwang, a defector and the head of a private think tank, said last year.