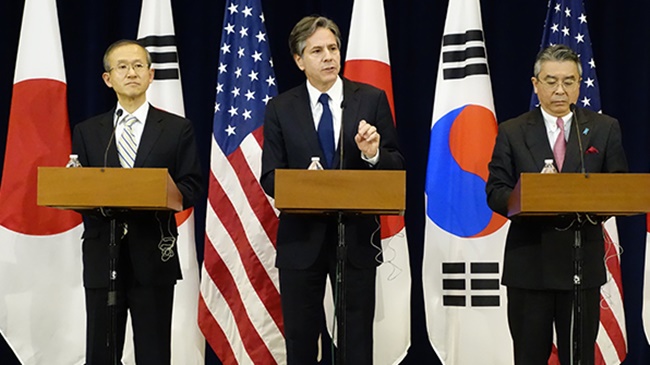 The gap between the North Korean government’s controversial missile tests is the longest hiatus of military provocation since South Korean President Moon Jae-in and Trump took office in May and January of this year. (Image: Yonhap)

The gap between the North Korean government’s controversial missile tests is the longest hiatus of military provocation since South Korean President Moon Jae-in and Trump took office in May and January of this year.

The unpredictable regime also defied widespread speculation in the media of a possible act of military provocation in time for the 72nd anniversary of the Workers’ Party of Korea as well as the 19th Communist Party Congress this month, despite a number of empty verbal threats exchanged between the North and the U.S.

Some believe the pause is a sign of possible peace talks, given the fact that North Korea appears to have ended its acts of provocation, which have been committed two to three times on average every month since the beginning of this year.

The South Korean and U.S. governments have both emphasized that stopping provocation is the first step towards peace talks on the part of North Korea.

Speaking to the press after trilateral talks with officials from the United States and Japan, an official from the Ministry of Foreign Affairs said the three countries agree that it’s important to encourage North Korea to continue to refrain from making threats to other countries.

Last month, Moon also said North Korea must stop threatening other countries first before seeking ways to resolve the issues prior to his departure for New York to attend the United Nations General Assembly.

Professor Kim Yeon-chul at Inje University says North Korea’s bellicosity has halted supposedly due to technical reasons, but the lull could have been affected by political elements too.

“If North Korea doesn’t show any interest in engaging in diplomatic talks during Trump’s visit to South Korea, it’s likely that they will resume provocation,” Kim said.

However, some warn against reading into the hiatus too far, as it could be caused by technical difficulties.

“It’s hard to predict the next move by the North while it should be received positively that provocation has stopped for a while. The most important variable will be Trump’s message to North Korea during his visit to Asia,” a source close to the government said.