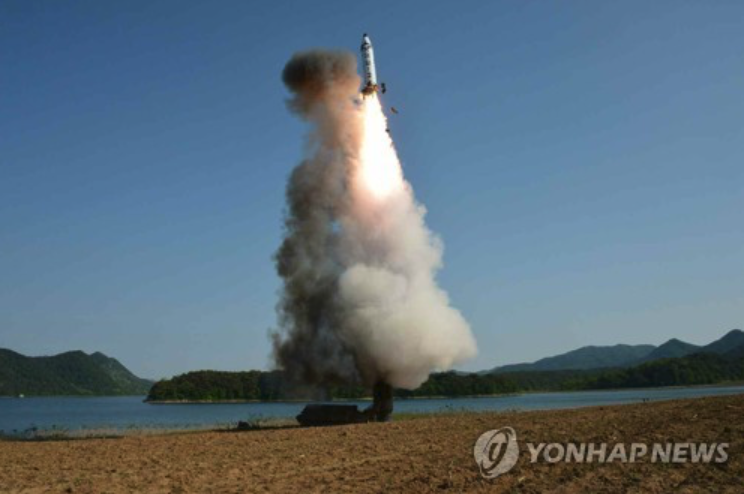 Photo released by the Rodong Sinmun on May 22 shows the test-firing of a new intermediate-range ballistic missile, known as the Pukguksong-2, in North Korea. (image: Yonhap)

SEOUL, May 22 (Korea Bizwire) – North Korean leader Kim Jong-un has approved the deployment of a new intermediate-range ballistic missile for combat use as the country succeeded in test-firing it, Pyongyang’s state media said Monday.

North Korea’s leader observed the launch of the ground-to-ground Pukguksong-2 missile, expressing satisfaction with its accuracy in hitting targets, according to the Korean Central News Agency (KCNA).

The missile, which was fired Sunday from the country’s western province, flew more than 500 kilometers, according to the South Korean military.

The missile is the same type that was launched Feb. 12. The model, also known as a KN-15 missile, is an upgraded version of a submarine-launched ballistic missile (SLBM) and is launched using solid fuel engine.

The North’s leader approved the deployment of the Pukguksong-2 for action, calling it a “successful strategic weapon,” the KCNA said.

“This type of missile should be rapidly mass-produced in a serial way” to arm the strategic force of the Korean People’s Army, Kim was quoted as saying by the report. He set forth the strategic tasks for bolstering the country’s nuclear force, it added.

The launch came just one week after the North test-fired another new mid-to-long-range missile, called the Hwasong-12, which it claims can carry a heavy nuclear warhead.

North Korea’s continued missile launches are likely to test Moon, who earlier vowed to seek a dual approach to the North’s denuclearization and inter-Korean dialogue. On Friday, North Korea condemned Moon’s policy, saying dialogue can never be compatible with confrontation.

The provocations came despite the U.S. top diplomat’s latest assurance that the U.S. has no intention to seek a regime change in North Korea.

Shrugging off what appears to be Washington’s conciliatory gesture, North Korea said Saturday that it will develop and produce more powerful weapons.

South Korea strongly condemned the North’s missile test, calling it a “reckless and irresponsible” act. The United Nations Security Council (UNSC) will convene an emergency meeting Tuesday to discuss it.

North Korea has claimed that its development of nuclear weapons is a deterrent against what it calls Washington’s hostile policy toward it.

North Korea is seeking to develop an intercontinental ballistic missile (ICBM) that can carry a nuclear warhead and reach as far as the U.S. mainland.

The North’s leader said in January that his country has entered the final stage of preparing to launch an ICBM.

Experts said the North’s reckless provocations seem to be aimed at seeking dialogue with the U.S. on equal footing by strengthening its nuclear capabilities. 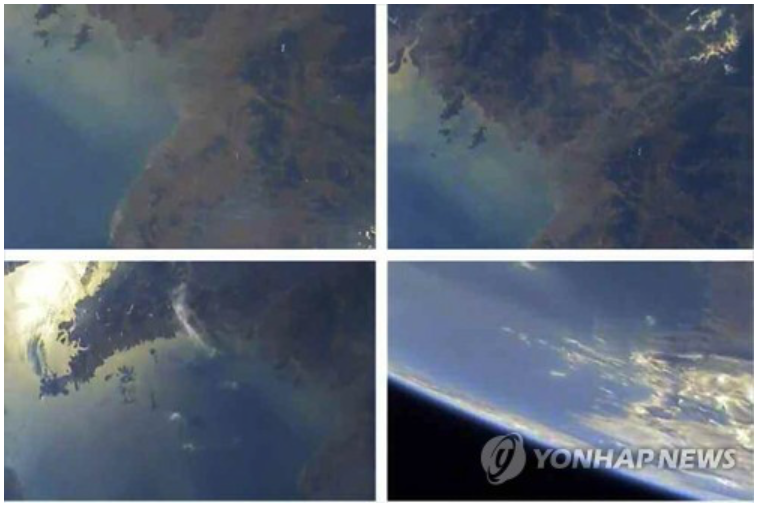 A set of photos unveiled by North Korea’s main newspaper, the Rodong Sinmun, on May 22, 2017, shows images of the Earth captured by a recording device mounted on the warhead of a new intermediate-range ballistic missile, which was fired a day earlier. (image: Yonhap)

Meanwhile, North Korea unveiled images of the Earth that it said were captured from a camera mounted on the missile’s warhead.

The photos are presumed to be taken when the missile was apparently re-entering the atmosphere.

Technology for “atmospheric re-entry” is a key element in developing an ICBM as the missile needs to withstand heat and pressure when it re-enters the atmosphere from space.

“The latest test appears to be aimed at securing the missile’s reliability and stability for deployment after improving problems found in the February launch,” said Kim Dong-yub, a professor at the Institute for Far Eastern Studies in Kyungnam University.