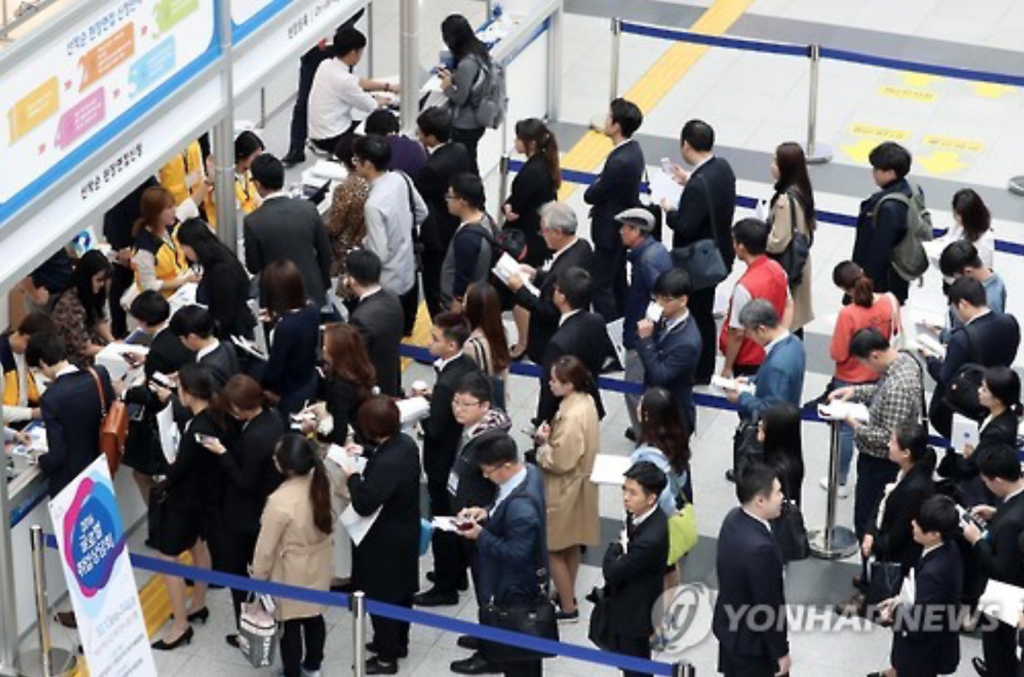 Job seekers waiting in line to get registered during a job fair at the BEXCO convention center in the southeastern port city of Busan on Oct. 13, 2016. (image: Yonhap)

SEOUL, Oct. 17 (Korea Bizwire) – The number of South Korea’s casual employees with no guaranteed hours of work reached a five-year high in the third quarter of this year, government data showed Monday, due to a rise in time-selective jobs amid a prolonged economic slump.

The number of employees who work for one hour to 17 hours per week came to 1.34 million as of the end of September this year, up 91,000 from the same period a year earlier, according to the data by Statistics Korea.

The third-quarter tally was the highest since the 1.54 million casual workers posted in the third quarter of 2011. Casual employees refer to those who work two to three hours a day or work three to four times per week.

The number of casual employees has recently been rising at a far faster clip than that of overall employed people. The on-year growth rate of casual workers stood at 7.2 percent in the third quarter with the comparable figure for total employed people reaching 1.2 percent.

In the second quarter, the number of casual workers increased 4.4 percent from a year earlier, compared with a 1.1 percent gain in that of total employed people.

The fast rise in the number of casual employees was attributed mainly to a government push to offer time-selective positions for women who lost their jobs because of childbirth and child care as part of efforts to raise the country’s employment rate to 70 percent by early 2018.

However, some experts pointed out that the longstanding weakness of Asia’s fourth-largest economy has forced companies to hire casual employees instead of regular workers.

“Basically, business factors are more to blame for the recent hike in the number of casual employees,” said Kim Kwang-suk, who teaches at Hanyang University in Seoul. “The government should create a virtuous circle of economic stimulus and increased investments to tackle the issue.”

South Korea has seen an increase in the number of casual workers during economic hardships. The number soared by 226,000 from a year ago in the fourth quarter of 1998 after South Korean firms were forced to conduct massive layoffs in the wake of the country’s foreign exchange crisis.

South Korea’s jobless rate increased to 3.6 percent in September from 3.2 percent a year earlier due mainly to a protracted slowdown in the manufacturing sector and exports. It marked the highest rate for the month of September in 11 years.

The unemployment rate for young people, aged between 15 and 29, reached 9.4 percent last month, up slightly from July’s 9.3 percent and the highest rate for September since the statistics agency started to compile such data in 1999.