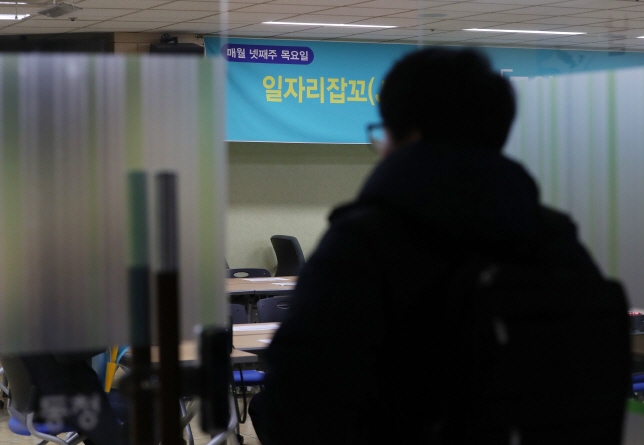 A presentation for those seeking job opportunities is empty at an exhibition center in Daegu, some 300 kilometers southeast of Seoul. (Yonhap)

SEJONG, Feb. 27 (Korea Bizwire) — The number of discouraged workers in South Korea touched an all-time high in 2019, data showed Thursday, pointing to a tough employment situation amid an economic slowdown.

Asia’s fourth-largest economy registered a monthly average of 533,000 discouraged workers last year, up 1.6 percent from a year earlier, according to the data from Statistics Korea and the office of Rep. Choo Kyung-ho of the main opposition United Future Party.

The figure was the largest since 2014, when data compilation began. It also marked the third consecutive year of increase, following gains of 9 percent and 7.4 percent in 2018 and 2017, respectively.

Discouraged workers refer to those who are currently unemployed and have not sought to find jobs in the last four weeks due to no suitable job options or other reasons, though they are eligible for employment and are willing to work, with experience of having looked for jobs in the past year.

The increase in the number of discouraged workers is seen as reflecting severe hardships facing South Korean job seekers.

Out of the total discouraged workers, a monthly average of 169,000 gave up looking for employment last year due to a lack of decent job opportunities amid the sluggishness of the local economy.

South Korea’s economy grew 2 percent on-year in 2019, the slowest expansion in a decade, stung by a trade war between the United States and China — its two major trade partners.