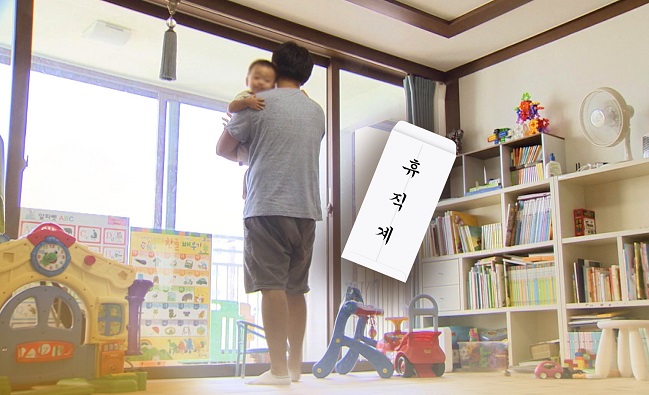 This computer-generated image from Yonhap News TV depicts a father taking care of his baby at home.

SEOUL, April 25 (Korea Bizwire) — The number of South Korean workers who took parental leave in 2021 decreased year-on-year for the first time since the system was introduced in 2001, government data showed Monday.

A total of 110,555 workers took time off to take care of their children last year, down 1.3 percent from the previous year’s 112,040, according to statistics from the labor ministry.

The decrease was attributed to the exceptionally large number of parental leave takers in 2020, when many schools and kindergartens closed due to COVID-19, forcing parents to take care of their kids at home.

Despite the overall decline, the number of men who took paternity leave increased by 5.9 percent to 29,041. Men accounted for 26.3 percent of the total, up 1.8 percentage points from the previous year.

By law, people whose children are younger than eight, or below the second grade of elementary school, are entitled to apply for a maximum one year of maternity or paternity leave.

The government provides financial support for subscribers to employment insurance who also sign up for parental leave, which is aimed at tackling the country’s ultra-low birth rate.