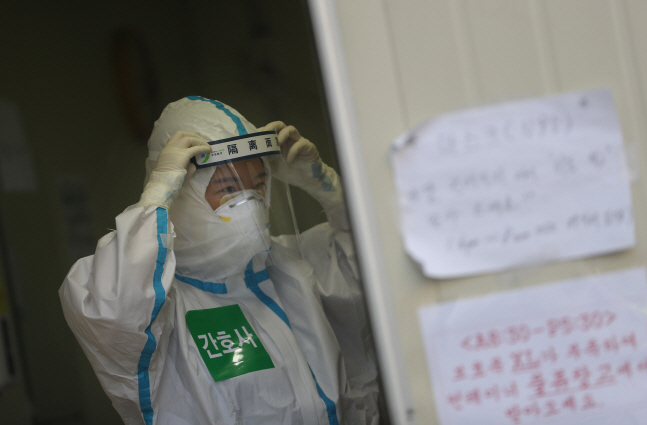 A nurse with protective gear makes preparations at Dongsan Hospital in the virus-hit city of Daegu on April 6, 2020. (Yonhap)

SEOUL, May 19 (Korea Bizwire) — Many nurses, who play a pivotal role in preventing the spread of the novel coronavirus, have experienced unfair treatment in hospitals due to financial difficulties, according to a recent survey.

According to a survey of 2,490 nurses working at medical institutions across the country conducted by the Korean Nurses Association, 45.1 percent were forced to take a leave of absence as the number of inpatients decreased.

In addition, despite a regulation that 70 percent of average wages should be disbursed for paid leave, 2.9 percent received less than this, and 13 percent did not allow family care leave and did not extend their contracts.

Some six nurses were also found to have been recommended to resign after taking unpaid leave.

Analysts say that hospitals suffering from financial difficulties are showing unreasonable behavior as the COVD-19 pandemic has been prolonged, with cutting nursing positions at the top of their priorities.

“If such a trend is left unaddressed, it may be impossible to secure nurses in the event of a national disaster, so an institutional mechanism is needed to secure nurses as required legal personnel,” the association claimed.