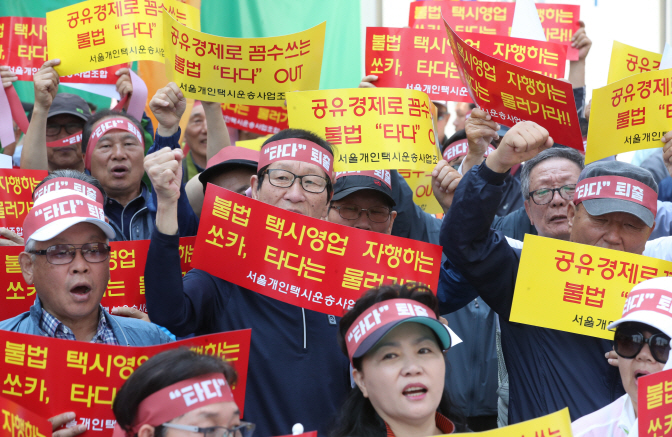 Taxi drivers hold a rally in Seoul on May 23, 2019 to protest new ride-hailing services. (Yonhap)

SEOUL, Jul. 16 (Korea Bizwire) — Leading businesses in the sharing economy such as Uber and Airbnb are taking center stage in the controversy that has erupted over the future of these types of enterprises in South Korea, which many believe is due to strong opposition from older companies.

The Korea Development Institute conducted a survey of 1,000 participants asking them about the source of controversy over the sharing economy, in which 38 percent pointed to older businesses that strongly oppose the change brought about by innovations in the way these new companies are doing business.

Among 50-somethings, on the other hand, 33.5 percent said the controversy was being caused by the government’s overreach in encouraging the development of the sharing economy.

Another 31.4 percent of those in their 60s responded likewise.

Asked about the active presence of the sharing economy in South Korea, 66.8 percent of the respondents said it was low.

The majority of respondents also argued that sharing services should be allowed within the limits set in terms of time and frequency.

In the case of car sharing, 42.3 percent of the respondents said it should be allowed only during certain hours, like between 7 a.m. and 10 a.m. from 8 p.m. to 11 p.m. They also said daily quotas should be set in place.

More than half of the respondents said a certain form of compensation or subsidy should be provided to older businesses, while arguing that it should be used to raise their competitiveness (43.4 percent).