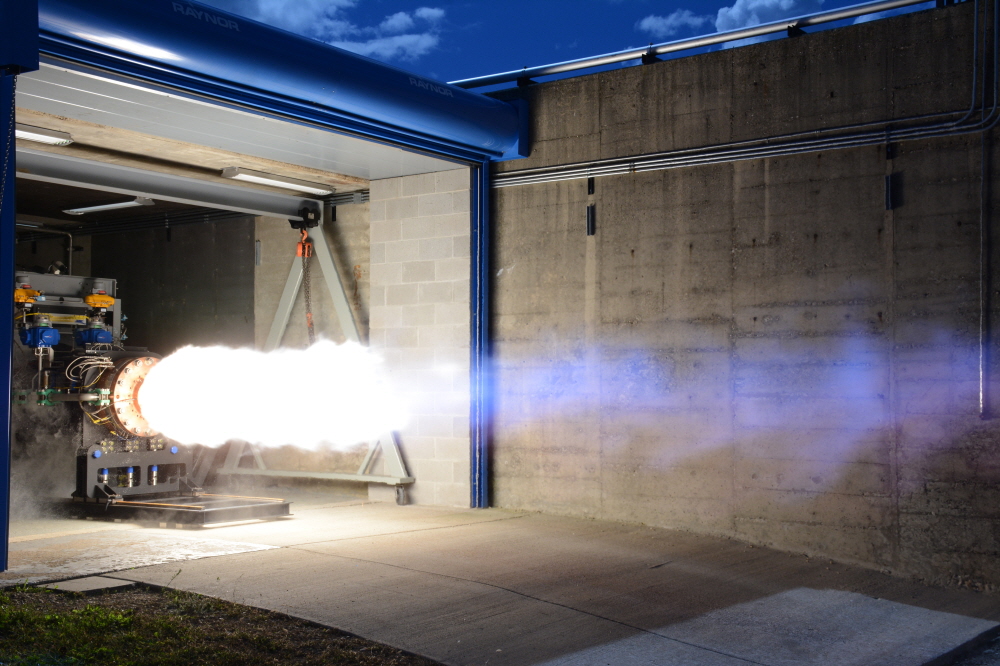 Like most combusting systems, rocket engines present some challenges in simulation. The modelling of cryogenic and supercritical propellants, the combustion of kerosene-based fuels and the patented vortex swirling flow can prove difficult, previously increasing the need to build more prototypes. “In the past we’ve not really been able to use CFD in a predictive way,” says ORBITEC Senior Propulsion Engineer Dr. Millicent Coil. “Most of us are from experimental backgrounds, so we tended to model the rocket alongside our real world testing but we struggled to get momentum from the data. We needed a better strategy with which to insert the numerical analysis.”

The cost of physical testing during the development cycle has motivated ORBITEC to embrace CFD. Whilst small scale, experimental costs are reasonable and can be investigated on the thrust stand, as scale increases, so the costs rapidly rise. “When we were first developing our vortex engine, most of the engines we were testing could be held in one hand — 50lbf or 100lbf thrust,” says ORBITEC’s Propulsion Lead Dr. Marty Chiaverini. “We could do a lot of the prototyping in-house or outsource it at relatively low cost, so it wasn’t really an issue if we needed to run hundreds of tests. Now the engines are much bigger, up to around 30,000 lbf of thrust, excessive iteration becomes prohibitively expensive.”

According to ORBITEC’s Dr. Chiaverini, the primary challenge is optimising the fuel injector design to yield high performance at a larger scale. He hopes that addressing this with Converge CFD will illuminate the physical phenomena and facilitate new engine development. The software company’s CONVERGE CFD code, originally developed for and proven on internal combustion engines, has some unique properties to enable ORBITEC to make a step change in the efficacy of the analysis. Instead of using a static, manually generated grid for the duration of the simulation, CONVERGE automates and fully couples the mesh generation at each time step. Uniquely, this process is coupled to both the flow and chemistry solvers. Known as Adaptive Mesh Refinement (AMR), this allows the simulation to automatically refine the mesh density around areas of specific interest, such as turbulent zones or large temperature gradients. These schemes drastically reduce preparation and computation time by up to five times.

For ORBITEC, the cut-cell and automatic meshing approaches applied in CONVERGE mean starting iterating in a day rather than a week. “From an engineering point of view, not having to mesh manually is huge,” says Dr. Coil. “It’s not that you don’t have to think about the mesh — it still succeeds or fails on your choices — but you don’t have to spend hours perfecting the mesh to avoid skewness like we did with the package we used previously.”

The engineers at ORBITEC have begun experimenting with CONVERGE and already have seen good results from the package on a number of smaller projects such as external flows over rockets, wind tunnels, and preburners. Bolstered by this success, they are now planning to model a new 30,000lb thrust rocket engine. The hope is to integrate CFD into the design processes for all of their new engines for various applications.

“Our CONVERGE software is already a powerful and trusted development tool in the automotive sector and this shows it can help engineers, even in areas where CFD was not deemed effective enough to be embraced,” says Convergent Science’s marketing director Rob Kaczmarek. “The gains possible in time and cost means in any combustion application, CONVERGE can assist engineers in finding the answers.”

About Convergent Science:
Founded in Madison, Wisconsin, Convergent Science is a world leader in computational fluid dynamics (CFD) software. Its flagship product, CONVERGE, includes groundbreaking technology that eliminates the user-defined mesh, fully couples the automated mesh and the solver at runtime, and automatically refines the mesh when and where it is needed. CONVERGE is revolutionizing the CFD industry and shifting the paradigm toward predictive CFD. For more information visit www.convergecfd.com