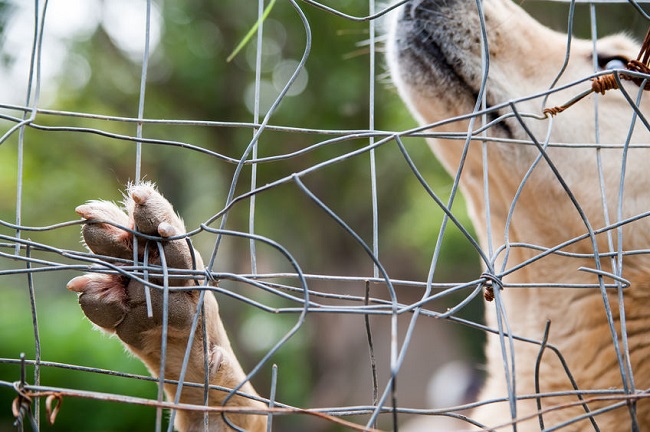 Dogs were kept in tiny steel cages so small that the animals could not even stretch out properly. (Image: Kobiz Media)

Beginning in August of last year, an investigation into the general practices of 20 dog meat farms revealed horrifying conditions. Dogs were kept in tiny steel cages so small that the animals could not even stretch out properly.

The cage floors were made of steel netting with holes large enough for feet to fall through, causing each inhabitant to constantly remain in a precarious balance. The holes served as toilets for the dogs, as their waste was sent right through the holes to pile up on the ground below.

The majority of the relevant authorities that regulate this particular industry have decreed that simply having a sheet of plastic on the ground to catch dog feces is sufficient. Perhaps this explains why one of the farms investigated had piles of feces that were nearly 20 cm high.

Of the 2,862 dog meat farms nationwide, 99 percent informed the relevant authorities that waste produced by their animals would be used as compost.

The record of dog meat farms being punished for infractions is spotty. Since 2010, there have been a mere 357 cases of punitive measures carried out against dog meat farms by authorities.

According to data provided by the Ministry of the Environment, there are an estimated 781,740 dogs in total being raised for meat, representing an average of 273 dogs per farm. Lee and Kara believe this figure is too low.

Accounting for the undocumented dog meat farms, they believe there could be more than a million dogs currently being raised for human consumption.

Lee said, “While countries such as China and Vietnam still have pockets of the population that raise dogs for food, Korea is the only country where one can find a dog meat farm housing 1,000 dogs.

Living in a society where pets number in the millions, it’s time we begin to change our ways. We need to say no to animal cruelty and start systematically stamping out dog meat farms.”