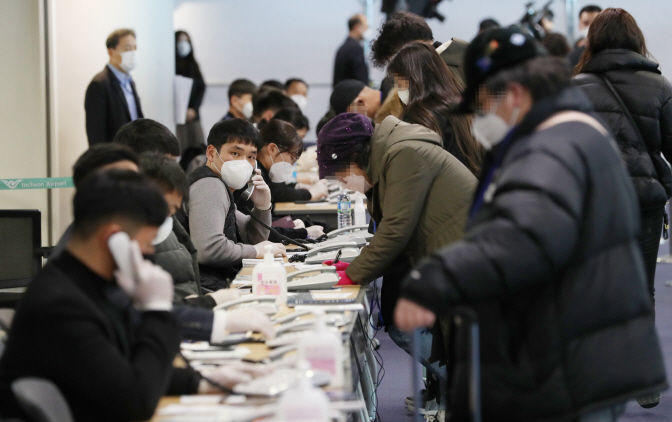 INCHEON, Feb. 5 (Korea Bizwire) — South Korea on Wednesday deployed over 600 quarantine officials at Incheon International Airport, the nation’s top airport west of Seoul, struggling to maintain effective defense against the spiraling coronavirus outbreak on the second day of the enforcement of an entry ban for non-Korean travelers from China’s Hubei Province.

According to the authorities, a total of 612 quarantine inspectors, including those dispatched from the military and police, were mobilized to the Incheon airport on the day to carry out multiple phases of screening for all passengers flying in from China.

The Incheon Airport National Quarantine Station said almost all its employees, totaling 133, were ordered to work alongside 221 personnel from the military, 76 from the police and 132 from Incheon International Airport Corp.

Under the temporary entry ban, all foreign travelers who have been to Hubei, the epicenter of the novel coronavirus outbreak, over the past two weeks are prohibited from entering the country.

Holders of a passport issued in Hubei province are also denied entry here, while visas issued by the South Korean Consulate General in Wuhan, the capital of Hubei, are temporarily suspended.

On Tuesday, a total of 8,956 passengers arrived in Incheon from China and not a single case of entry denial was reported.

A similar number of passengers departing from China is expected to land at the airport on Wednesday. Prior to the virus outbreak, the Incheon airport received a daily average of around 20,000 passengers from China. 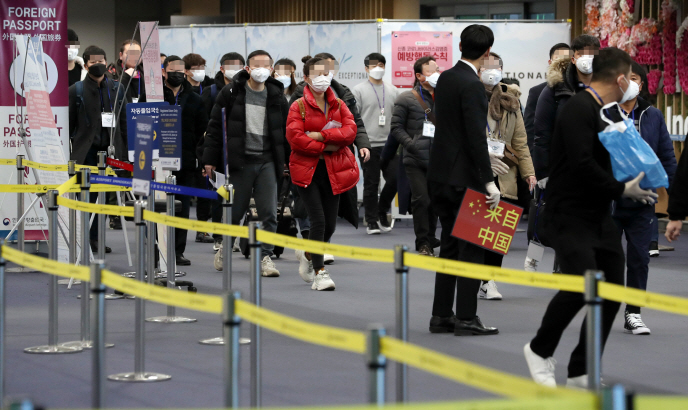 Like the first day, all the passengers from China were instructed to undergo lengthy quarantine and immigration procedures, including examination of body temperatures and respiratory symptoms and verification of domestic contact details, at the airport’s three China-only arrival areas.

“It cannot be said that the number of quarantine officers at the Incheon airport is sufficient. Thanks to the support personnel from various other government offices, however, the quarantine screening and other operations have proceeded relatively smoothly,” said a quarantine officer.

“In particular, we have felt a bit relieved as the number of arrivals from China has more than halved.”

At around 11 a.m., flights from Shanghai, Wuxi and Nanjing successively landed. All passengers went through health screenings and had their domestic addresses and phone numbers verified before being issued a quarantine certificate.

Few passengers complained about the lengthy quarantine and immigration procedures.

A Chinese woman, who arrived from Nanjing, praised South Korea’s reinforced quarantine system, saying, “Three to four procedures have been increased from before. But all the procedures were implemented very fast and I didn’t feel any inconvenience.”

Another Chinese national who arrived from Wuxi with his daughters also expressed satisfaction at South Korea’s quarantine procedures.

“I didn’t feel any inconvenience during quarantine screening. Airport officials also played a good job in guiding us through the labyrinthine airport,” the Chinese national said.