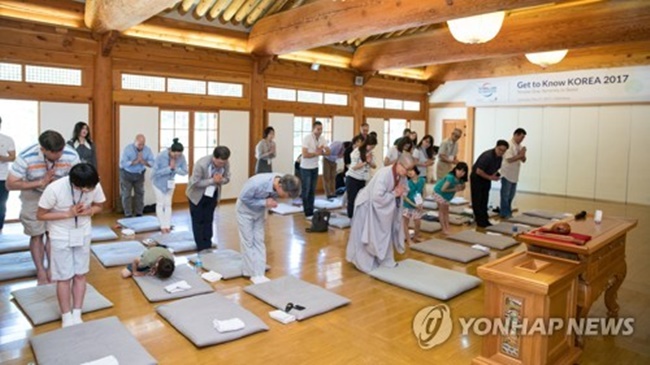 This file photo shows participants in a temple stay program in Jingwansa Temple in western Seoul on May 27, 2017. (Image: Yonhap)

SEOUL, March 16 (Korea Bizwire) – The number of foreigners who experienced Buddhist temple stay programs in South Korea increased by more than a quarter in 2017 from a year ago, Buddhist officials said Friday.

A total of 70,910 foreigners participated in temple stay programs last year run by the Jogye Order, South Korea’s largest Buddhist group. The figure represents a 27-percent increase from 2016, according to the order.

The total number of domestic participants since 2002, when the order first launched its temple stay program, reached 3.97 million. Overseas visitors amounted to 495,000.

The Jogye Order currently runs its temple stay programs in 130 temples throughout the country. Of those, 26 are specialized for foreign participants by providing translation services.

To coincide with the hosting of the PyeongChang Winter Olympics, the order operated five temples in Gangwon Province for foreigners coming to visit the country for the Winter Games. The order said those venues saw the number of visitors during the January-February period jump more than 25 fold from a year ago.