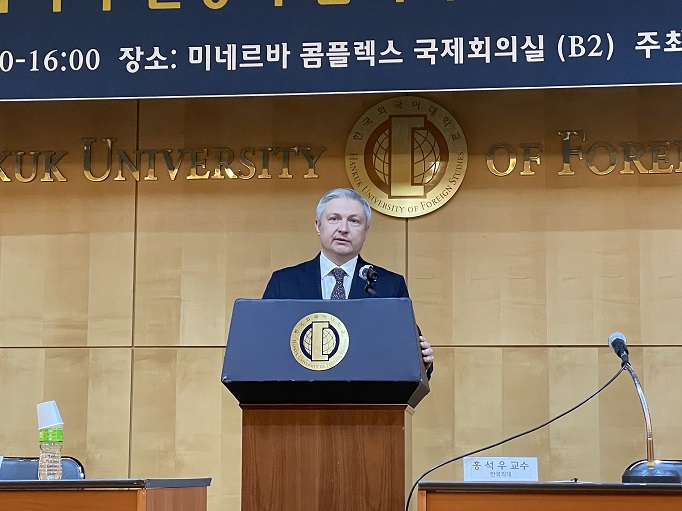 Ukrainian Ambassador to South Korea Dmytro Ponomarenko speaks during a special forum on Russia’s invasion of Ukraine and its impact on the Korean Peninsula held at Hankuk University of Foreign Studies in central Seoul on March 7, 2022. (Yonhap)

SEOUL, March 7 (Korea Bizwire) — Ukraine’s top envoy to Seoul said Monday his office has raised over US$3 million in donations from South Korea to support Ukrainian efforts in the war against Russia.

“We will send some of the donated money directly to the National Bank of Ukraine and use some to buy and send food and medicine for our people,” Ukrainian Ambassador Dmytro Ponomarenko said as he revealed the amount of donations his embassy received from South Koreans at a forum held at Hankuk University of Foreign Studies in central Seoul.

Last week, the Ukrainian Embassy in Seoul announced a special bank account to collect humanitarian donations to assist the Eastern European country in its plight. The South Korean government has also pledged to provide US$10 million in humanitarian assistance to Ukraine.

“We sincerely appreciate the strong support from the Republic of Korea and its people,” Ponomarenko said.

The envoy also stressed that international sanctions were of “great importance” to stop Russia’s aggression, and added Ukraine was “grateful for the solidarity” by “friends and partners to fight Russia economically.”

Seoul announced earlier in the day it plans to suspend transactions with Russia’s central bank, joining the global move to impose additional sanctions against Moscow over its invasion of Ukraine.

At the forum spotlighting the ongoing Ukrainian crisis, local security experts highlighted Seoul’s need to strengthen its deterrence posture in order to avoid a situation similar to that of Ukraine.

Hong Kyu-dok, an international relations professor at Sookmyung Women’s University in Seoul, argued South Korea should make practical efforts to bolster its ties with alliances and strengthen its military deterrence.