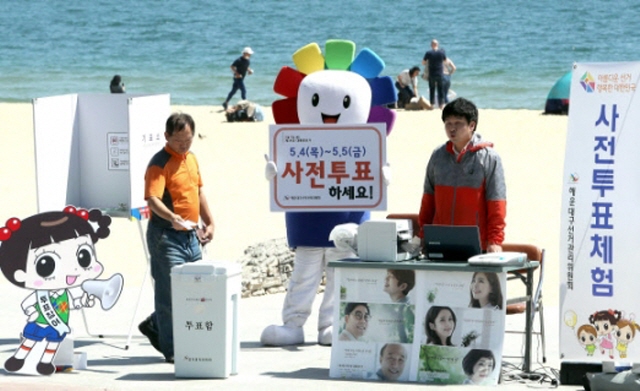 A mock polling station is set up on a beach in Busan to raise awareness of the early voting period ahead of the May 9 presidential election. (image: Yonhpa)

SEOUL, Apr. 25 (Korea Bizwire) — Overseas voters will cast their ballots for the May 9 presidential election this week, the national election watchdog said Monday.

Voting will begin in Auckland, New Zealand on Tuesday and run through Sunday at 204 polling stations in 116 countries, the National Election Commission said.

It will be the fourth time South Korea has held overseas votes following the parliamentary elections in 2012 and 2016 and the presidential poll in 2012.

This year, 294,633 voters have registered for the election, the commission said.

Voting will take place at 175 overseas missions, 25 other venues and four military units where South Korean troops have been dispatched, including one in the United Arab Emirates.

The stations will operate on different days during the voting period as designated by the watchdog.