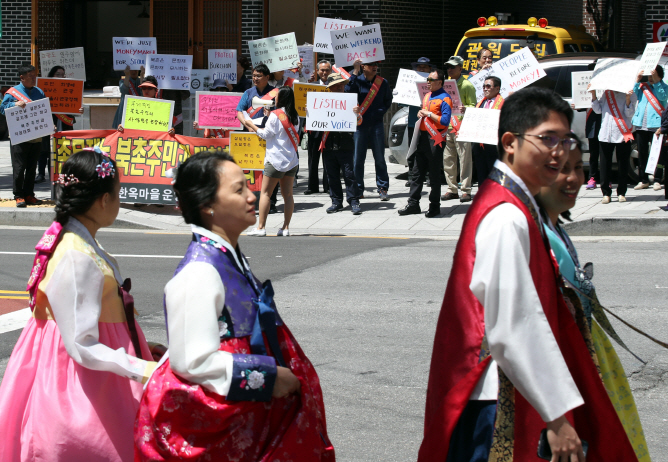 Tourists wearing traditional Korean attire, or “hanbok,” pass by a group protesting against tourist visits to Bukchon Hanok Village in central Seoul. The residents from the traditional village argue that an overwhelming number of visitors disrupts their lives and leaves tons of trash in the neighborhood. (image: Yonhap)

Her duty is to maintain order in the village filled with traditional Korean houses, or “hanok,” when tourists flood through the narrow alleys. No yelling, no fly-tipping and no photos of residents without their permission.

Apparently thanks in part to order-keepers like Kim, most visitors strolling through the neighborhood on a weekday afternoon were talking in whispers while trying to capture their memorable moments in photos.

“It is controllable when they are individual travelers,” Kim said, wearing a yellow jacket with a message written in Korean, English and Chinese that read, “Please be quiet.”

“But it’s a totally different story when they come in groups, especially on weekends,” the woman in her early 50s said while keeping her eyes on the tourists.

Kim is one of seven workers who took on the job starting this month, hired by the Jongno Ward Office as a response to the soaring number of complaints by residents of the village.

Bukchon is one of the first tourist destinations in South Korea to struggle with overtourism, which is also sweeping other parts of the world, including destinations like Barcelona and Venice.

Starting in late April, the residents have taken to the streets to hold weekly rallies to demand the government come up with practical measures to protect their quality of life, which they say has significantly deteriorated since the village became a tourist hotspot.

According to a study by the Tourism Research Institute under Hanyang University, an average estimate of 37,100 people visited the Bukchon village on weekdays between October 2016 and June 2017. The figure is more than 10 times the number of households living there, which was tallied at 3,534 in 2016. During the weekend, the average number of visitors soars to 54,200.

Residents and experts concur that the locals are not benefiting from the hike in the number of tourists, while bearing all the costs, such as noise, traffic jams, pollution and invasion of privacy, to name a few. This imbalance is at the center of the tension. 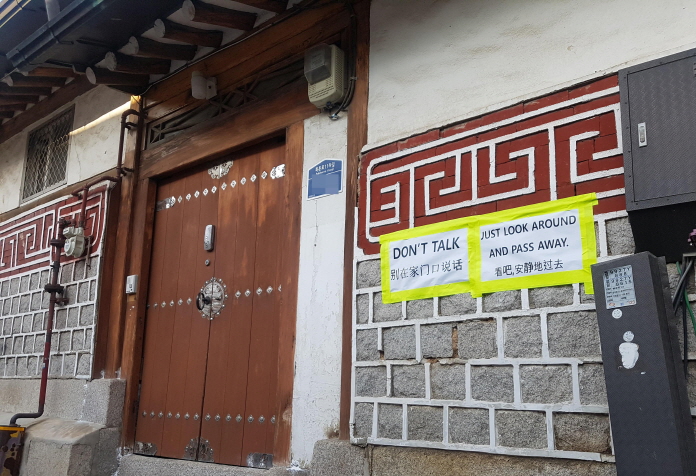 Signs posted on the wall of a traditional house, or “hanok,” at Bukchon Hanok Village in Seoul. (image: Yonhap)

“We have almost gotten used to people on buses filling roads, taking photos for Instagram and leaving. Because the community does not benefit, the friction amplifies,” Duminy said.

Nico Mulder, Marketing Strategy Manager at Amsterdam Marketing, said the key is creating more awareness of what is allowed and not allowed in a city or a neighborhood.

As more residents of central Amsterdam began to feel that tourism damaged quality of life in their neighborhood, the city launched a campaign to show visitors that the place they were visiting is a place where people live, bring their children to school and sleep at night, according to Mulder.

“Amsterdam has 18 million visitors per year,” he said. “We would rather have less visitors but those who stay longer, because we believe it contributes to the quality of life of the residents.”

The forum was held in line with the 7th United Nations World tourism Organization Global Summit on Urban Tourism in the face of surging conflicts between residents and visitors throughout popular tourist destinations around the globe.

Bukchon village is not the only South Korean neighborhood suffering from overtourism.

The country’s southern resort island of Jeju is currently divided over the construction of a second airport on the island.

In late 2015, the government announced a plan to build the second airport in the eastern part of the scenic resort island by 2025 to meet rapidly growing travel demand.

Opponents of the new airport worry that it will bring more tourists to the island while it is already suffering from a flurry of problems stemming from overcrowding.

The research forecast the visitor tally to surpass the 20 million mark in the next five to 10 years, if the current pace of growth is maintained.

“In the most conservative case, economic inefficiency will begin to occur when the number of visitors surpasses 19.9 million,” it said. “Even when we take the most optimistic stance, 22.7 million is the threshold.” Economic inefficiency refers to a phenomenon where the economic benefits of tourism start to diminish despite an increasing number of tourists, according to the report.

The South Korean government, meanwhile, is cautious about how to approach the overcrowding issue.

“At the moment, the situation of Seoul is not good for prohibitive solutions, since the city is not overwhelmed by overtourism the same way as cities like Barcelona, Venice or Amsterdam,” Rhee Jae-sung, president of the Seoul Tourism Organization, said.

While some neighborhoods, such as Bukchon, have become victims of their own popularity, many other cities in South Korea still strive to attract more visitors, he pointed out. 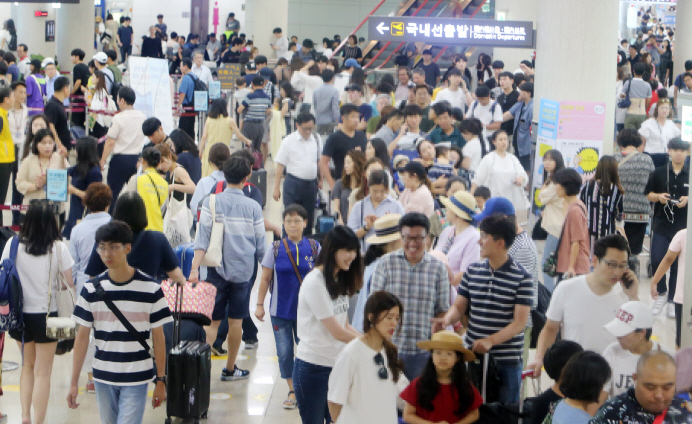 Passengers form long queues in front of boarding gates at the airport on South Korea’s southern resort island of Jeju as Typhoon Soulik retreated from the Korean Peninsula on Aug. 24, 2018. (image: Yonhap)

In fact, the main focus of South Korea’s tourism organizations and the industry at large in the past year has been finding ways to attract more tourists to the country after the number plunged due to a diplomatic row between Seoul and Beijing.

In March last year, China took a set of retaliatory measures against South Korea, including a ban on group tours, after Seoul’s decision to deploy an advanced U.S. missile defense system in the country.

Experts say communication with various stakeholders, including citizens and industry, is key to resolving issues related to excessive numbers of visitors.

“The industry is catalyst to rising visitation no matter what the government does,” Duminy, the tourism official from Cape Town, said. “It’s about how to get the industry to support (the government) to avoid overtourism.”

Rhee, the head of the Seoul tourism promotion agency, said the city is conducting a survey on Bukchon to better understand the nature and scope of overcrowding and come up with appropriate measures to handle the problem.

Putting regular sustainable tourism impact assessment into practice could be one way to tackle the challenge, said Na Hyo-woo, CEO of Good Travel, a firm that sells fair travel products.

“It’s often too late to try to fix things once a neighborhood or a city is struggling with overtourism,” Na said.