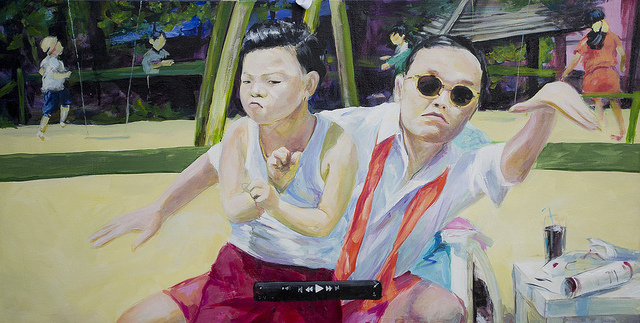 Artworks attributable to so called “entertainer-artists” enjoy greater popularity among Korean gallery-goers. (image: “That kid (Gangnam Style)”, painting by a.powers-fudyma/Flickr) Editor’s comment: The image is not directly related to the article, but we’d like to express sincere gratitude for this extraordinary art performance. Thanks to a.powers-fudyma.

SEOUL, Korea, Mar 13, 2014 (Korea Bizwire) – In a depressed economy, the art world can’t be free from slow business. Most artists complain it’s getting hard to make a living on proceeds from paintings alone. But there is one segment that’s prospering despite all that. That’s the so-called entertainer-artists who hold exhibits in top-class galleries and in some cases boast sale of a painting at more than tens of millions won.

The most well-known such entertainer-artists include Cho Young-Nam, former singer in his late 60s, Shim Eun-Ha, retired actress who was popular in the 1990s, and Kim Hye-soo, current actress in her early 40s. In addition to them, there are popular star painters such as Cho Jae-hyun, Ha Jung-woo, Yoo Jun-sang, and Koo Hye-sun (all male or female actors), Naul and Sol Bi (singers), and Lim Hyuk-pil (comedian).

For the past four decades, Cho Young-Nam has held more than 40 exhibits individually or in group. In an exhibit to be held until the end of March in Ulsan, he will display 40-or-so oriental painting-like artworks. Ha Jung-woo, famous for his leading role in movies like Nameless Gangster and The Berlin File, held individual exhibits in two galleries early this year and sold out all his 60 works.

An official at Pyo Gallery in Seoul’s Itaewon that held Ha’s exhibit said, “90 percent of the buyers were general collectors who have nothing to do with his fans.” That means the buyers were attracted to the future value of the paintings instead of the painter’s Tinseltown fame.

To this trend of favoring movie stars to the exclusion of real artists, there are voices of criticism. A young artist complained, “I feel pathetic whenever I hear some entertainers earn tens of million won easily from dabbling in painting while I do it for living but get little respect.” Hong Kyung-han, art critic, was more disapproving of the trend, saying, “Most entertainer-painters are at best art school student level and their artworks are just copycat imitation of their favorite painters like Matisse and Picasso. I am skeptical whether and how much this trend will help the depress art market because it’s such a small segment of the market and not likely sustainable.”