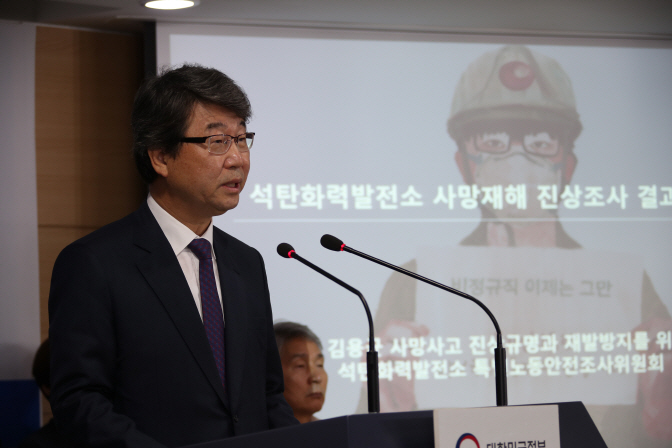 Kim Ji-hyung, the head of the special investigative panel, speaks during a press briefing in Seoul on Aug. 19, 2019. (Yonhap)

Kim Yong-gyun, a 24-year-old contract worker, was killed in a conveyor belt accident in December last year at a thermal power plant in Taean, about 150 kilometers southwest of Seoul.

His death sparked public anger over the treatment of temporary workers, raising the need to tackle the so-called outsourcing of high-risk work.

The special investigative committee unveiled the outcome of the four-month long probe and a set of its recommendation to ensure the safety of the working environment for contract workers at power plants.

“Kim’s death has sounded an alarm that we should not further turn a blind eye to the issue,” Kim Ji-hyung, the panel chief, told a press briefing.

The committee said both the power plant operator and the subcontractor that Kim worked for neglected measures to secure the safety of workers, while trying to pass the buck to each other.

“Risks were not only outsourced, but also they further increased in a way that poses a serious threat to the safety and health of workers,” Kim said.

Kim’s death prompted the National Assembly to pass a bill designed to better ensure the safety of irregular or contract workers last year, a move aimed at preventing the outsourcing of high-risk work.