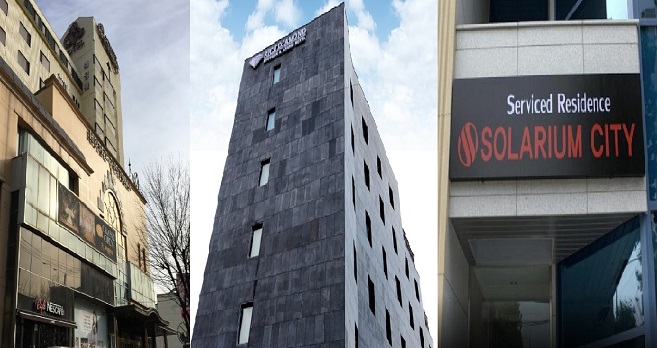 Every summer, local community centers for the elderly are converted into air-conditioned cooling centers as daytime highs shoot up to nearly 40 C and stay above 25 C overnight.

This year, however, most indoor cooling centers have been shut down due to concerns the closed, air-conditioned venues may trigger new coronavirus infections among elderly visitors.

The infectious virus has proven to be more risky for elderly patients.

While the fatality of patients aged 29 or younger came in at 0, it jumped to 9.36 percent for those in their seventies and 25.08 percent for those 80 or older, according to data from the Korea Centers for Disease Control and Prevention.

To meet the challenging demand, some local communities have installed temporary cooling centers at outdoor parks, playgrounds and shaded areas under bridges — while adhering to anti-virus rules, such as keeping population density low and providing hand sanitizer.

The northern Seoul ward of Dobong, for instance, said it has set up nine outdoors cooling centers at a soccer field, a children’s park and areas under bridges in addition to a few indoor cooling centers.

Seongbuk Ward, in northeastern Seoul, plans to run overnight cooling centers at an indoor badminton court. The ward office said it will provide separate bedding and tents to lower infection risks while limiting the number of visitors. 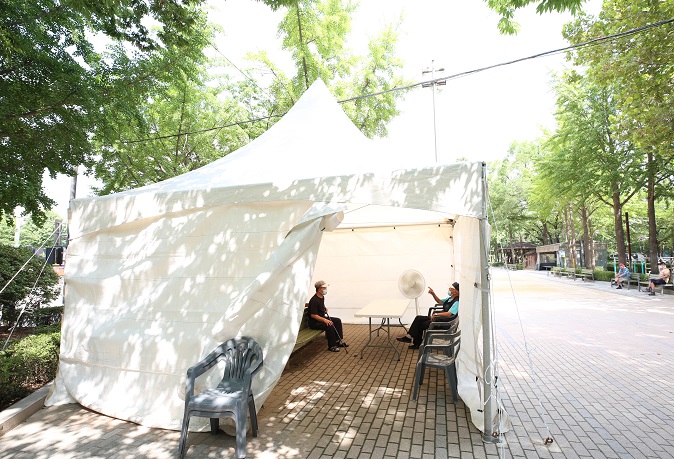 This photo, provided by the Guro ward office, shows a tent and a fan set up at a park in the western Seoul ward.

In some areas of Seoul, local governments have teamed up with motels and hotels that are struggling to keep their rooms full amid the pandemic.

“We have signed agreements with three hotels to provide up to 70 rooms as cooling centers for elderly residents since a lot of them have closed down,” an official at the northern Seoul ward of Gangbuk said.

“The hotels were also quite happy about it, since customer demand is low due to the new coronavirus,” the official added.

The eastern Seoul ward of Gangdong runs a similar plan.

“To minimize infection risks, the rooms are provided for only solo use, with the exception of elderly couples who can share a room,” said an official at the ward office, which has secured 24 rooms at two local hotels.

“With support from the city government, we pay around 50,000 won (US$41.70) per room per night to the hotels, they are quite satisfied too.”

To manage demand, both ward offices said the accommodations are available to low-income residents aged 60 or older.