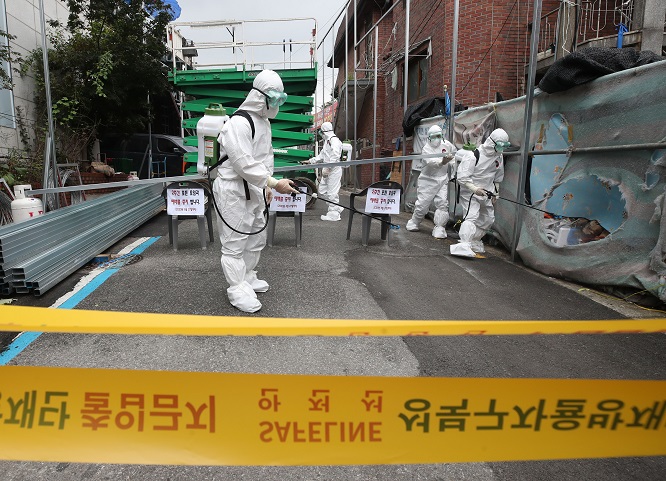 Public officials disinfect a church in Seoul’s Seongbuk Ward on Aug. 14, 2020, following the detection of a cluster of new coronavirus infections at the church. (Yonhap)

SEOUL, Aug. 15 (Korea Bizwire) — The South Korean government on Saturday advised people in the greater Seoul area to refrain from traveling to other areas for the next two weeks in a bid to prevent the spread of the coronavirus.

The recommendation came shortly after the government placed stricter social distancing guidelines on the greater Seoul area, as daily new COVID-19 cases in the country reached a five-month high of 166, with the highly infectious disease spreading at an alarming rate.

The decision to raise the social distancing scheme in Seoul and the surrounding Gyeonggi region up one notch to Level 2 was reached at a pan-governmental COVID-19 meeting of the Central Disaster and Safety Countermeasures Headquarters, chaired by Prime Minister Chung Sye-kyun.

The heightened guidelines for Seoul and Gyeonggi Province will take effect Sunday and continue for two weeks.

Unless there are signs of a fall in the number of virus infections in the period, the strengthened social distancing guidelines for the area will be extended for another two weeks, the government said.

The move comes after the Korea Centers for Disease Control and Prevention (KCDC) reported that new daily coronavirus cases reached 166 as of midnight Friday, raising the total caseload to 15,039.

The number of new cases is the highest tallied since March 11, when the country reported 242 new daily infections during the height of a mass outbreak in Daegu and a cluster originating from a call center building in Seoul.

Of the new cases, 155 were of local transmissions. The number of daily infections reached triple digits for the second straight day.

“We are in a dangerous situation where if we cannot overcome this crisis, we might revert to a mass epidemic situation similar to what other countries around the world are facing,” Chung said. 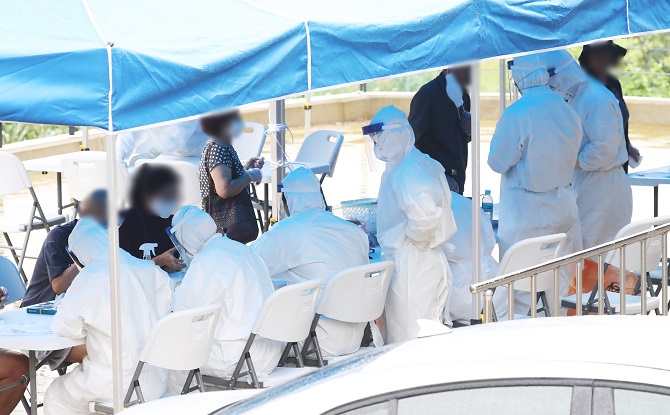 A makeshift new coronavirus testing center is set up in front of a town hall in Yangpyeong, Gyeonggi Province, on Aug. 15, 2020, after 31 locals were confirmed with COVID-19 after attending a gathering among the townspeople. (Yonhap)

The pace of virus infections in the greater Seoul area has been rapid, said health officials, adding this is an initial sign of a resurgence in massive infections.

Expecting a growing number of confirmed cases in the greater Seoul area, the officials requested people to abide by the boosted guidelines for the three-day weekend holiday starting Saturday.

Under Level 2 social distancing guidelines, public facilities, including libraries, galleries and museums, will be maintained at 50 percent capacity in terms of allowed visitors. Welfare and child care centers will be advised to suspend operations.

Large gatherings, such as local festivals or trade fairs, with estimated attendees of more than 50 people indoors and 100 outdoors will either be banned or postponed.

Schools are required to have both remote learning and in-person classes, and sporting events are to revert back to crowdless matches.

Private businesses designated as high-risk facilities, such as bars, karaoke businesses, indoor gyms, concert halls, logistics centers, “hagwon,” or cram schools, with more than 300 people, and buffet restaurants, will be allowed to operate but only under strict quarantine measures. Regular cafes and restaurants will be allowed to operate as well.

Internet cafes and buffets at wedding venues will also be included in the high-risk group starting Wednesday. High-risk businesses could face closure if the virus situation does not show signs of improvement within the next two weeks.

Companies, both public and private, must also allow flexible working options, such as remote working, to reduce the density of people at workplaces.