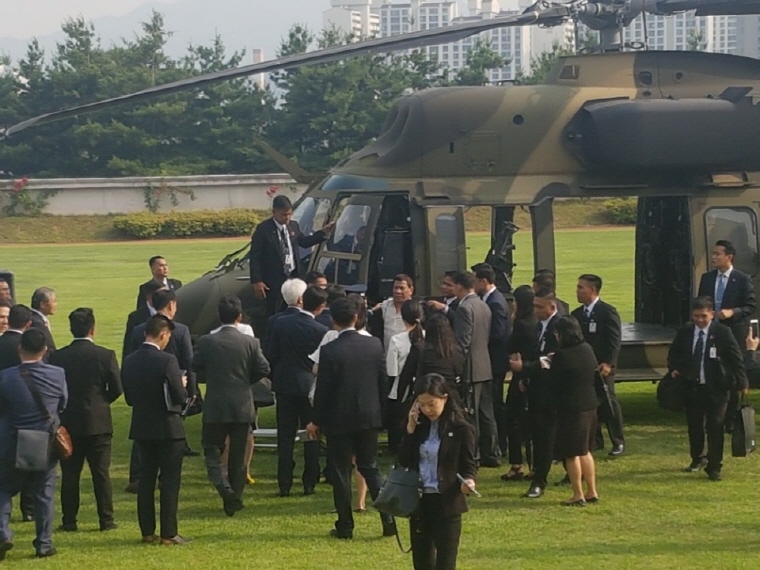 SEOUL, Jun. 7 (Korea Bizwire) — The training grounds belonging to the Ministry of National Defense complex in Yongsan, Seoul saw their very first helicopter landing yesterday morning since the construction of the compound in 2003.

The domestically produced KAI KUH-1 Surion flew into Seoul from an army base in Pocheon, Gyeonggi Province on June 5.

A military official said that the Surion was relocated to the ministry’s training grounds in preparation for Philippine President Rodrigo Duterte’s visit.

President Duterte, who left South Korea yesterday after his official visit, had expressed his interest in the Korean-made helicopter since last year.

Because of his tight schedule, Duterte was unable to visit Sacheon, South Gyeongsang Province where the company that produces Surion helicopters is located.

However, Duterte’s significant interest in examining the actual aircraft himself was what prompted officials to make the flight possible.

The Surion measures 15 meters in length, and 4.5 meters in height while boasting a maximum takeoff weight of 8,709 kilograms. The aircraft is equipped with a T-700 turboshaft engine.

Arriving at the Ministry of Defense an hour and a half ahead of schedule at around 4:30 pm., the first thing President Duterte did was to sit in the Surion’s co-pilot seat for 10 minutes while he listened to explanations on the aircraft’s functions and method of operation.

As with the Surion, military officials had various rifles, machine guns, anti-ship missiles, torpedoes, and other Korean-made weapons on display for the leader to view.

The Philippine president stayed on site for approximately 20 minutes, and said he had previously fired the K1A rifle on display for him.

A government official said President Duterte already seemed to be familiar with the weapons on exhibit, before adding that he would do his best “to make the Surion’s export to the Philippines a possibility.”

As Duterte’s arrival to the Ministry of Defense compound was much earlier than expected, Vice Minister Suh Choo-suk, who was attending to other matters, had to rush back to welcome the foreign head of state.