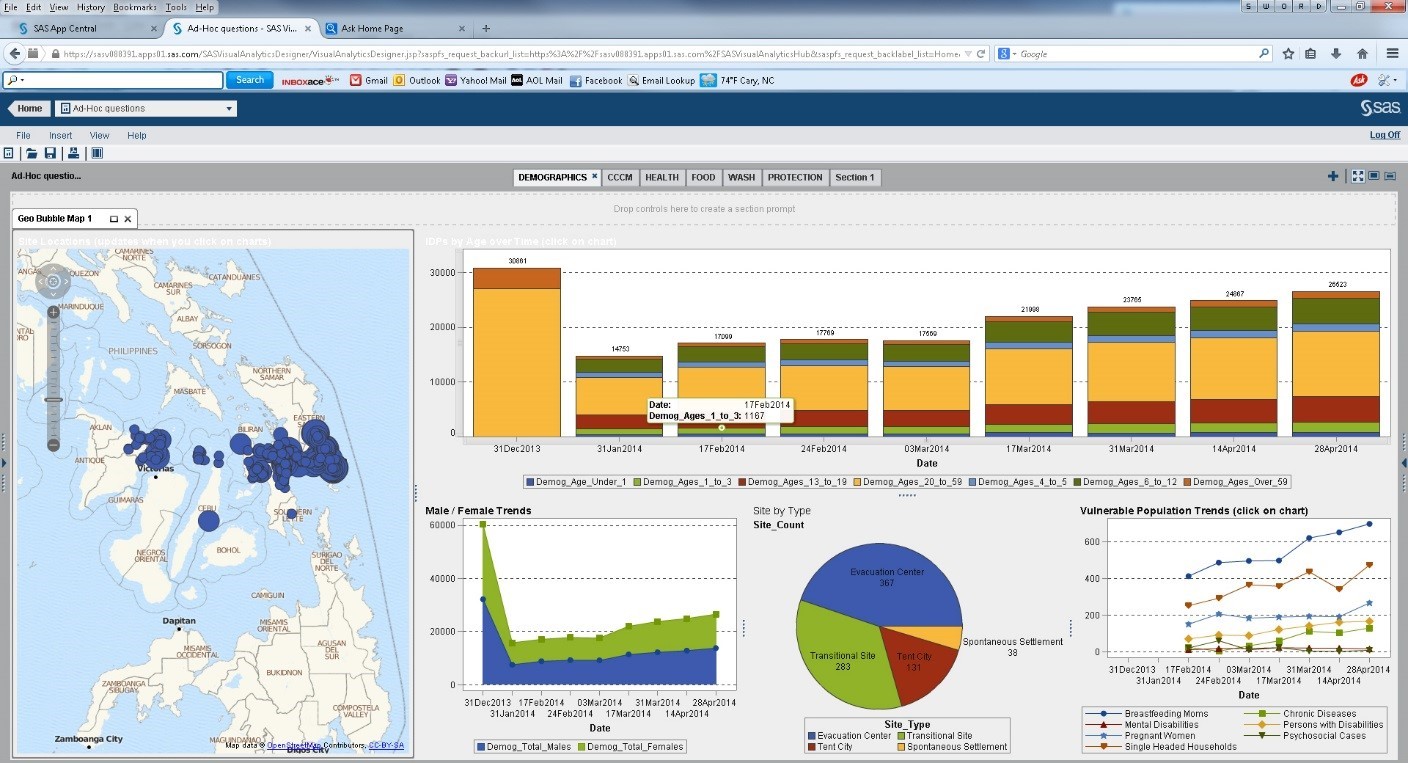 CARY, N.C., June 10, 2014 (Korea Bizwire) - The International Organization for Migration (IOM) has to know where to focus vital resources. As first responders to any crisis that displaces people, the IOM manages shelters and coordinates operational efforts in places where people gather after natural disasters, such as evacuation centers, camps, schools or private buildings. Using SAS® data visualization and text mining, the agency identified and rallied responders to assist with the most critical health, water and sanitation problems in areas devastated by super Typhoon Haiyan.

Super Typhoon Haiyan ripped through the Philippines in November 2013, killing thousands and leaving over 300,000 people homeless. To coordinate basic services in evacuation centers, the IOM provided data on hundreds of displacement sites to partners on the ground. Data revealing service gaps in health, water and sanitation in targeted areas were provided to the Department of Health, World Health Organization, UNICEF and health cluster partners to ensure the needs of displaced people were addressed.

The IOM also shared the data with SAS for a pro bono pilot project. The agency delivered the data via its Displacement Tracking Matrix (DTM), an information management tool that tracks the locations and needs of displaced people.

The IOM is committed to modernizing how it, and the world, can better respond to disasters. The project with SAS demonstrated how massive amounts of data in Excel could be quickly and easily analyzed with SAS Visual Analytics to show, in near-real time, detailed information on what relief is needed and where.

“We have been working to enhance preparedness by developing practical tools for government officials, humanitarian organizations and affected communities,” said Ambassador William Swing, IOM Director General. “The SAS collaboration provided the right tool at the right time. We, our beneficiaries and partners are all grateful for the partnership and technology.”

SAS Visual Analytics organized and analyzed the data to identify shelters with the most critical health risks. For instance, within minutes of loading the data, a map uncovered shelters experiencing a dangerous mix of overcrowding, unsafe drinking water and solid waste disposal problems. The IOM could also quickly pinpoint sites where a high number of families still lived in makeshift shelters, or that were experiencing dramatic growth of certain vulnerable populations in a short amount of time.

A text analysis revealed the most common health complaints to be upper respiratory and cold symptoms. But more alarming were higher concentrations of diarrhea, fever and skin disease among older people living in evacuation centers in Leyte. The DTM-generated data was shared with local health authorities to address these health needs.

The United Nations has called for a “data revolution” where more data is made public, statistics support public and private decision making, and transparency and accountability build trust between society and states. The IOM has made data public for years, and is now leading the next wave of the data revolution by bringing statistical and analytical insights to the masses.

The latest SAS Visual Analytics analyses can be found in the IOM’s recently released report on Philippines recovery.

The IOM hopes to create a replicable platform that can greatly reduce the time to analyze and visualize displacement indicators, and deliver deeper insights on the unique needs of each crisis. This platform would be easy to share with countries that adopt these practices.

The IOM continues to innovate new ways to use data to target relief efforts, including using social media to fill in information gaps.

During the frenzy of any disaster response, collecting real-time information on conditions across the thousands of islands in the Philippines would be a big challenge. This was particularly true in the wake of Haiyan, with phone service down throughout much of the country. “In the days following the typhoon, the IOM needed to know the conditions in the southeast coastal city of Guiuan – what relief was available to people in evacuation centers,” said Nuno Nunes, Global CCCM Cluster Coordinator for natural disasters.

With a population near 50,000, Guiuan is traditionally known for beautiful beaches and a vibrant fishing industry. While a text mining analysis of more than 10,000 tweets indicated total structural devastation in Guiuan, it confirmed that the Red Cross was distributing food and an Australian emergency medical team was on the ground. It further shed light on what the local hospital needed most – essential medicines such as antibiotics and fuel for generators, so that critical hospital services could continue to meet increased health care demands.

“The IOM is in the perfect position to modernize global humanitarian response efforts and save more lives. Efficiencies and analytic insights will benefit the relief organizations and countries that rely on the valuable information collected by the IOM during a crisis,” said I-Sah Hsieh, Global Manager of International Development at SAS. “We look forward to bringing more innovations through proven analytic best practices.”

SAS Visual Analytics lets users explore all data, of any size, not just a sample. Users can spot patterns, identify opportunities for further analysis, and convey results in easy-to-understand charts, graphs and animations, via web reports or iPad® and Android tablets. SAS can also quickly identify patterns, trends and relationships that are not apparent unless graphically displayed. SAS Text Miner analyzes huge amounts of structured or unstructured data to identify patterns and associations between words and phrases.

SAS is the leader in business analytics software and services, and the largest independent vendor in the business intelligence market. Through innovative solutions, SAS helps customers at more than 70,000 sites improve performance and deliver value by making better decisions faster. Since 1976 SAS has been giving customers around the world THE POWER TO KNOW®.