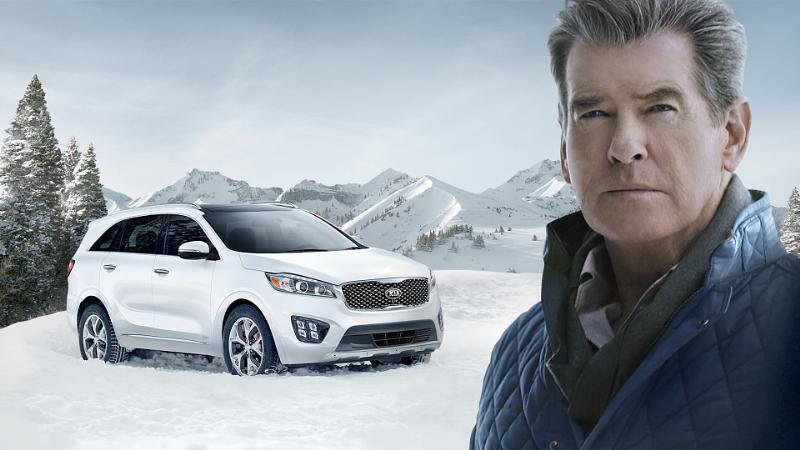 IRVINE, Calif., Jan. 27 (Korea Bizwire) — Pierce Brosnan, known worldwide for his sophisticated movie hero roles, again makes the “Perfect Getaway” in Kia Motors America’s (KMA) 60-second spot for the all-new 2016 Kia Sorento CUV, making its broadcast debut during the third quarter of Super Bowl XLIX.  In the spot, part of KMA’s multifaceted campaign for the 2016 Sorento CUV, Brosnan listens to a Hollywood agent pitching a starring role in an upcoming project.  As the agent describes various scenes, Brosnan confidently interjects one movie cliché after another, wrongly assuming he and the Sorento will encounter danger at every turn.

“Packed with first-class materials and amenities, the all-new Sorento delivers a premium utility experience, and Pierce Brosnan’s persona is the perfect fit for our seventh Super Bowl commercial, which finds the action star and Kia’s most capable CUV ever charging up a snowy mountain road for a very different type of adventure that turns out to be the ‘Perfect Getaway,’” said Michael Sprague, executive vice president of sales and marketing, KMA.

“Along with the two leading teams, at one of America’s greatest sporting events, the Super Bowl commercials are the centerpiece of the day,” said Brosnan. “I’ve enjoyed being a part of the Kia team, which traditionally has one of the most memorable spots in the game.”

Before and after the Super Bowl, Kia’s “The Perfect Getaway Vehicle” campaign – created by advertising agency of record, David&Goliath – will incorporate multiple components, including TV, cinema, digital and social media.

About the All-New 2016 Kia Sorento
The completely redesigned 2016 Sorento CUV, which raises the bar on the segment with its refinement and first-class amenities, is larger and more capable than ever with more room for passengers and cargo.  Standard premium features and luxurious amenities span the line of five trim levels and the Sorento is now offered in three engine choices, including a 240 hp 2.0L turbo-charged inline-4.  The Sorento is built at the brand’s U.S. manufacturing plant* – Kia Motors Manufacturing Georgia – in West Point, Georgia.

About Kia Motors America
Kia Motors America (KMA) is the marketing and distribution arm of Kia Motors Corporation based in Seoul, South Korea.  KMA proudly serves as the “Official Automotive Partner” of the NBA and LPGA and set an all-time annual sales record in 2014, surpassing the 500,000 unit mark for the third consecutive year.   KMA offers a complete line of vehicles, including the rear-drive K9001 flagship sedan, Cadenza premium sedan, Sorento CUV, Soul urban passenger vehicle, Soul Electric Vehicle2, Sportage compact CUV, Optima midsize sedan, Optima Hybrid, the Forte compact sedan, Forte5 and Forte Koup, Rio and Rio 5-door subcompacts and the Sedona midsize multi-purpose vehicle, through a network of more than 765 dealers across the United States.  Kia’s U.S. manufacturing plant in West Point, Georgia, builds the Optima* and Sorento* and is responsible for the creation of more than 14,000 plant and supplier jobs.

* The Sorento and Optima GDI (EX, SX & Limited and certain LX Trims only) are assembled in the United States from U.S. and globally sourced parts