SEOUL, April 18 (Korea Bizwire) – The American major league baseball team Pittsburgh Pirates is planning to send a state-of-the-art pitching machine called the e-Hack Attack to infielder Kang Jung-ho, who is currently sidelined as he awaits a second trial in his home country of South Korea after appealing an eight-month sentence for fleeing the scene of a drunk-driving accident.

The e-Hack Attack, according to the official MLB website, is capable of imitating the unique pitching styles of some baseball greats, including pitchers Corey Kluber of the Cleveland Indians, who is known for its his slider, and Kyle Hendricks of the Chicago Cubs, famous for his changeup. It’s also thought to be modeled after the Shizuoka Prefecture pitching machine, the fastest pitching machine in the world with a top speed of 230 kilometers per hour.

As the machine’s striking capability draws attention, some sports analysts speculate the team’s move to send Kang a pitching machine is a sign that shows how valuable a player he is to the Pittsburgh Pirates.

In 2015, he finished in third place for the National League’s Rookie of the Year voting.

Speaking to MLB.com in an interview, current Pirates manager Clint Hurdle said, “We’re trying to get him a machine with velocity and spin, to help.

“He’s been more working indoors, doing everything he can to prepare. But in here, we’re moving on until he’s back.’

Hurdle reportedly keeps in contact with Kang’s assistant frequently to be up to date with the situation surrounding his legal battle over a DUI case from last December, in which he was caught leaving the site after driving his car into a guard rail at the junction near Samseong Station while driving drunk. 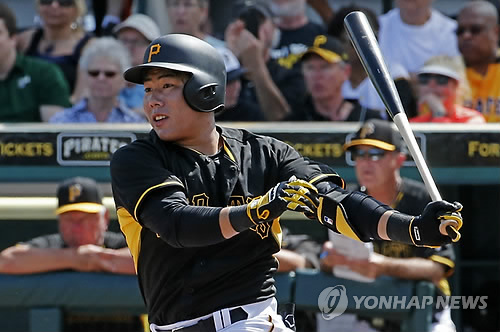 As the machine’s striking capability draws attention, some sports analysts speculate the team’s move to send Kang a pitching machine is a sign that shows how valuable a player he is to the Pittsburgh Pirates. (Image courtesy of Yonhap)

Speaking to a local newspaper, Pirates general manager Neal Huntington hinted Kang might be able to return to the U.S. this year.

Last month, Kang was handed down an eight-month prison sentence suspended for two years by the Seoul Central District Court.

Kang was previously fined twice for driving under the influence prior to last December.