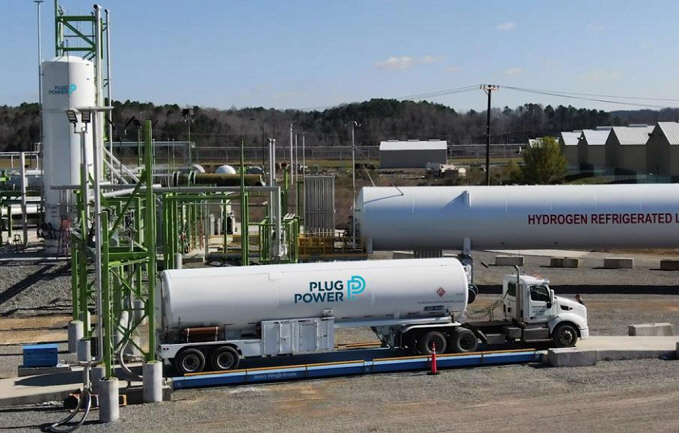 LATHAM, N.Y., May 17 (Korea Bizwire) – Plug Power Inc. (NASDAQ: PLUG), a leading provider of turnkey hydrogen solutions for the global green hydrogen economy, has been awarded an order to deliver a one gigawatt (GW) electrolyzer to hydrogen company H2 Energy Europe. Planned for a green hydrogen production complex in Denmark, this is the largest capacity electrolyzer installation in the world to date.

Harnessing offshore wind power, Plug’s electrolyzer technology will enable the production of up to 100,000 metric tonnes per year of green hydrogen for use in the energy and transportation sector in northern Europe, supplying the fuel needed for the equivalent of approximately 15,000 heavy duty vehicles per day. Through its joint venture with Hyundai, H2 Energy will supply fleets of heavy-duty fuel cell trucks. In addition, earlier this year H2 Energy entered a joint venture with Phillips 66 to build more than 250 hydrogen refueling stations in Denmark, Germany and Austria supplied with green hydrogen from H2 Energy.

“We see green hydrogen as the future and have made significant investments in green hydrogen including in the construction of a gigafactory for electrolyzer production,” noted Andy Marsh, CEO of Plug. “Our operational readiness and manufacturing capacity were key determinants in our selection for the world’s largest order to date, and we are pleased to be a part of this project with H2 Energy.”

Plug’s electrolyzer products destined for H2 Energy’s Danish complex will be manufactured at Plug’s gigafactory in Rochester, N.Y., the world’s first and largest fuel cell and electrolyzer manufacturing gigafactory. Deployment of the technology at H2 Energy’s complex is expected in 2024, with production of green hydrogen in 2025. The hydrogen production complex, announced in September 2021 by the Danish government, will be located near Esbjerg and owned and operated by H2 Energy Europe.

“Plug Power’s unique knowledge and market position within the green hydrogen ecosystem made our choice of collaboration very easy. We have the same ambitions to reduce CO2 emissions and create a world where hydrogen is the future of energy,” said Rolf Huber, Founder and CEO, H2 Energy.

Plug has been a leader in PEM (proton exchange membrane) electrolysis technology for nearly 50 years and was recently named the number one hydrogen electrolyzer company by Guidehouse Insights.

Plug is building an end-to-end green hydrogen ecosystem, from production, storage and delivery to energy generation, to help its customers meet their business goals and decarbonize the economy. In creating the first commercially viable market for hydrogen fuel cell technology, the company has deployed more than 50,000 fuel cell systems and over 165 fueling stations, more than anyone else in the world, and is the largest buyer of liquid hydrogen. With plans to build and operate a green hydrogen highway across North America and Europe, Plug is building a state-of-the-art gigafactory to produce electrolyzers and fuel cells and multiple green hydrogen production plants that will yield 500 tons of liquid green hydrogen daily by 2025. Plug will deliver its green hydrogen solutions directly to its customers and through joint venture partners into multiple environments, including material handling, e-mobility, power generation, and industrial applications.

Plug has been a leader in PEM (proton exchange membrane) electrolysis technology for nearly 50 years and was recently named the number one hydrogen electrolyzer company by Guidehouse Insights. This order with H2 Energy Europe follows a series of other sizable electrolyzer orders across the globe for Plug, including a 250 MW unit through a joint venture with Fortescue Future Industries Pty Ltd. in Australia, a 100 MW unit for Fertiglobe in Egypt, and a 10 MW unit for MOL Group in Hungary. In the U.S., Plug Power is currently installing 565 MW of its own electrolyzer products across its green hydrogen production network. Plug’s independent green hydrogen production network expects to deliver 70 TPD by the end of 2022 and remains on track for 500 TPD in North America by 2025 and 1,000 TPD globally by 2028.

The company behind the world’s first and most comprehensive green hydrogen ecosystem, Plug is making green hydrogen adoption simple for companies ready to improve both the efficiency and sustainability of their operations. For more information, visit www.plugpower.com.

H2 Energy was established in Zurich, Switzerland, in 2014 with the vision to play an active role in fighting climate change. The company wants to make hydrogen from renewable energy a cornerstone of the energy system by expanding the entire value chain across production, distribution and consumption in a sustainable and economic way. H2 Energy is involved in the entire hydrogen value chain, offering know-how and engineering each step of the way. The company draws on many years of experience, particularly in creating hydrogen production plants, establishing hydrogen refueling stations and in the engineering of hydrogen fuel cell applications. In 2020, Trafigura and H2 Energy announced a commercial collaboration to develop the production, storage and distribution of green hydrogen for refueling stations and industrial customers. Under the joint venture H2 Energy Europe, the two companies will invest in green hydrogen ecosystems across Europe. Visit: www.h2energy.ch

This communication contains “forward-looking statements” within the meaning of the Private Securities Litigation Reform Act of 1995 that involve significant risks and uncertainties about Plug Power Inc. (“PLUG”), including but not limited to statements about: PLUG’s plans to build and operate a green hydrogen highway across North America and Europe; PLUG’s electrolyzer technology expectation to produce up to 432 tons per day (TPD) of green hydrogen at the Denmark site; Plug’s independent green hydrogen production network expectation to deliver 70 TPD by the end of 2022 and 500 TPD in North America by 2025 and 1,000 TPD globally by 2028; the potential of PLUG’s customers to reduce their carbon footprint, generally and specifically displacing approximately 1.6 million tons of carbon emissions per year from this project. Such statements are subject to risks and uncertainties that could cause actual performance or results to differ materially from those expressed in these statements. For a further description of the risks and uncertainties that could cause actual results to differ from those expressed in these forward-looking statements, as well as risks relating to the business of PLUG in general, see PLUG’s public filings with the Securities and Exchange Commission (the “SEC”), including the “Risk Factors” section of PLUG’s Annual Report on Form 10-K for the year ended December 31, 2021 and any subsequent filings with the SEC. Readers are cautioned not to place undue reliance on these forward-looking statements. The forward-looking statements are made as of the date hereof, and PLUG undertakes no obligation to update such statements as a result of new information.