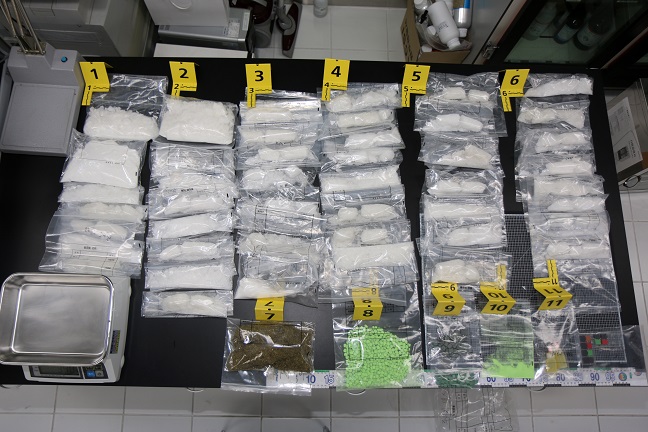 This photo released by the Gangwon Police Agency on Sept. 7, 2021, shows illegal narcotics recently seized from a drug trafficking ring.

CHUNCHEON, Sept. 7 (Korea Bizwire) — Police in the eastern city of Chuncheon said Tuesday they arrested 14 people on charges of smuggling and distributing illegal drugs, and another four people, including TV celebrity Amy, who allegedly used narcotics from them, officials said Tuesday.

The Gangwon Police Agency recently busted a drug trafficking operation that allegedly brought in drugs from Vietnam, the Philippines and other countries, largely by international airmail, and sold them to clients in South Korea via the instant messaging service Telegram.

Police arrested 14 dealers including its boss, a man in his 40s.

In a joint operation with customs authorities, police seized 6.2 kilograms of methamphetamine, 791 grams of ketamine, 2.1 kg of synthetic cannabinoids, 1,344 ecstasy pills, 167 g of marijuana and 47 million won (US$40,612) in cash.

The drugs were concealed in electric sockets, police said. They have an estimated street value of 21.9 billion won and can be used by 214,000 people.

Gangwon police apprehended 37 of their clients and formally arrested four of them, including Amy, on charges of habitually using illegal substances.

The singer and TV personality, whose legal name is Lee Yoon-ji, has already been handed over to the prosecution, police said.

She got a suspended prison term in 2012 for taking the surgical anesthesia propofol and was fined in 2014 for illegally using the hypnotic zolpidem.