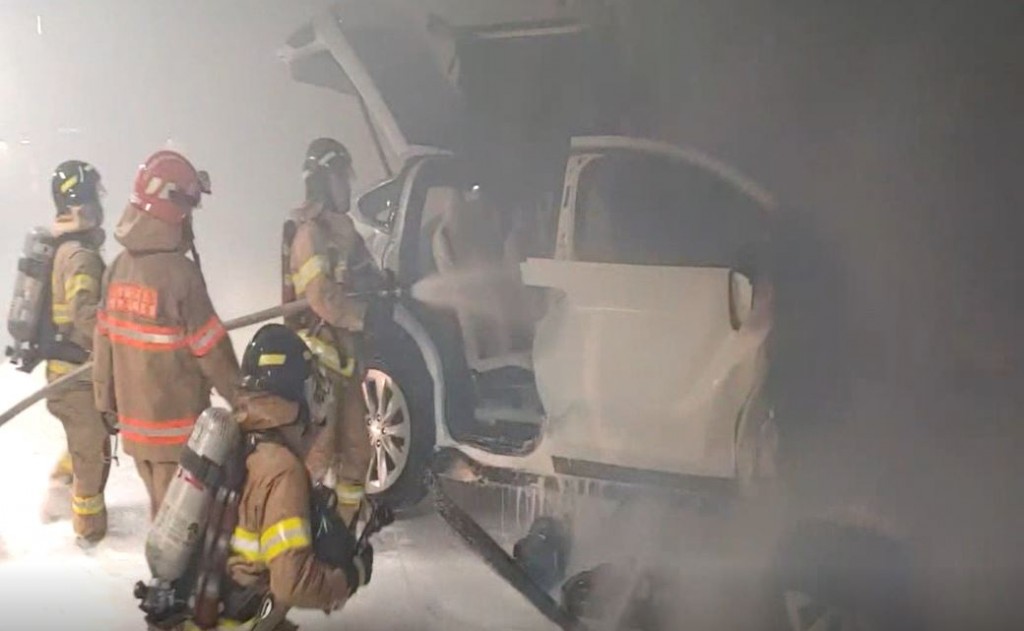 A Tesla Model X electric vehicle catches fire at a Seoul apartment parking lot on Dec. 10, 2020, killing one and injuring two, in this photo provided by Yongsan Fire Station.

SEOUL, April 1 (Korea Bizwire) — Police said Thursday a designated driver was likely to blame for a Tesla EV-involved accident that killed one person last year, and no mechanical failures were discovered in the forensic analysis.

The Yongsan Police Station said the 60-year-old driver, surnamed Choi, was at fault in the accident in which the Tesla Model X crashed into a parking lot wall at a Seoul apartment on Dec. 9.

The car caught fire and its owner in the passenger seat was killed. An employee of the apartment was also injured.

Investigators said an analysis by the National Forensic Service (NFS) found no mechanical faults in the SUV, and the rear light was off at the time of the incident.

They said the analysis of the telemetric data retrieved from the Tesla’s server indicated only the accelerator was working at the time of the accident and the vehicle rammed into the wall at a speed of 95 kilometers per hour.

The lithium-ion battery in the Model X caught fire after the crash, and the severe damage made it hard to open the door from the victim’s side, they noted.

Firefighters could not immediately open the SUV’s door to rescue the car owner, and they later took the owner out of the car through the trunk and rushed him to a hospital, but he had died.

Police said they will refer Choi to prosecutors on the charge of vehicular homicide.

The designated driver has claimed that the car went out of control due to “unintended acceleration.”