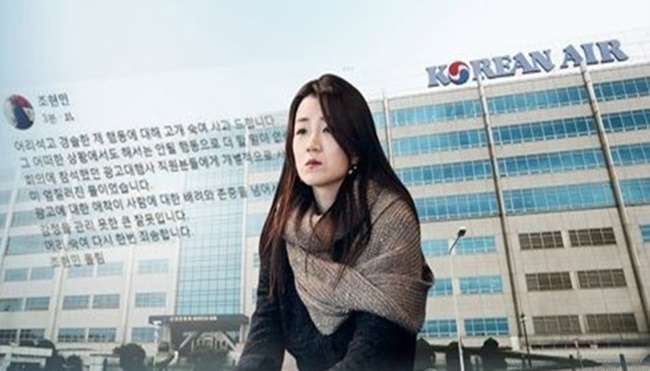 Cho Hyun-min, a Korean Air senior executive and younger daughter of Chairman Cho Yang-ho, was booked and banned from overseas travel on Tuesday.

SEOUL, April 18 (Korea Bizwire) – Police raided an advertisement company Wednesday in a probe into allegations that a daughter of the Korean Air Lines Co. chief threw water at the agency’s employee during a business meeting.

Cho Hyun-min, a Korean Air senior executive and younger daughter of Chairman Cho Yang-ho, was booked and banned from overseas travel on Tuesday.

Cho is accused of yelling at the ad firm manager and of throwing water at his face during a meeting last month. She has denied the claim and insists she only pushed him.

The Seoul Gangseo Police Station said it sent about 10 investigators to the ad company. They examined a recording of the meeting and text messages exchanged among participants. it added.

Also on Wednesday, the Ministry of Land, Infrastructure and Transport said it has launched a separate probe into Cho’s alleged violation of the Aviation Business Act, which bans foreigners from being registered as directors of airline companies.

Cho, who was born in Hawaii, is an American citizen but was registered as a director of Jin Air Co., the budget unit of Korean Air Lines, between 2010 and 2016.

The transport ministry is also accused of not properly overseeing JinAir in 2013, when the budget carrier changed its air transport license.