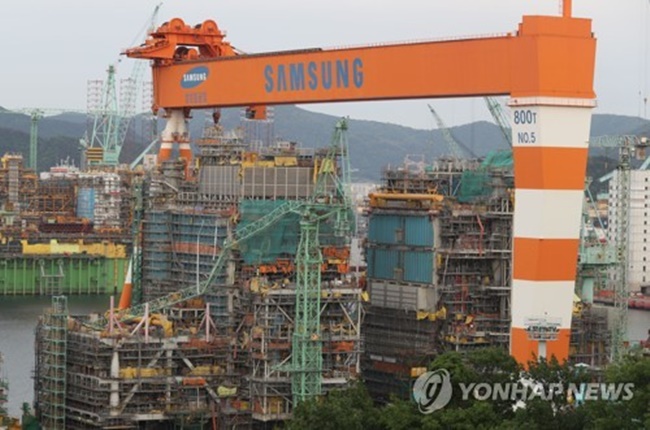 In particular, police plan to look into possible communication errors, working conditions at the shipyard and mechanical flaws. (Image: Yonhap)

GEOJE, South Korea, May 4 (Korea Bizwire) – Police on Thursday raided several offices of Samsung Heavy Industries over a deadly crane accident that occurred at one of its shipyards this week.

On Monday, two cranes collided at the shipyard in the southeastern port city of Geoje, causing a structure to fall from one of the cranes. Six workers at the site were killed, while 25 others were injured.

Some 30 investigators were sent to seize workbooks and manuals on safety regulations and education from about five offices at the shipyard, police said.

“We will analyze the material we gathered through the raid and strictly investigate the possibility of negligence on the part of Samsung Heavy and other officials,” said a police official.

In particular, police plan to look into possible communication errors, working conditions at the shipyard and mechanical flaws.

Samsung Heavy said it has never come under a police raid before.

“We will cooperate as much as we can with the police raid and to determine the cause of the accident,” a company official said.

The accident occurred as workers were finishing an ocean platform to be delivered to France next month. A French company placed the US$500 million order in December 2012.