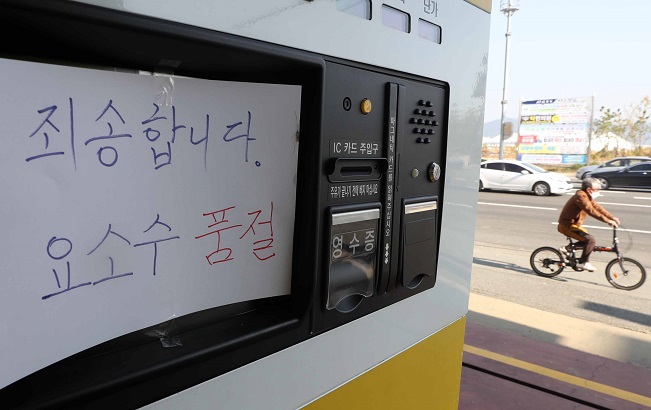 A notice at a gas station in Changwon, southeastern South Korea, says urea water is out of stock in this file photo taken on Nov. 4, 2021. (Yonhap)

SEOUL, Nov. 8 (Korea Bizwire) — Hoarders of urea water solution could face up to three years in prison or a fine of up to 100 million won (US$84,000), the government warned Monday, as it launched a special crackdown on illegal market activities amid a shortage of the material essential to diesel vehicles.

The government launched the crackdown by mobilizing 31 inter-agency teams comprising 108 personnel as the country grapples with a shortage of urea water solution, known as diesel exhaust fluid used to reduce emissions.

The shortage happened since China tightened exports of fertilizers and related materials, including urea, in October amid a power crisis caused by a coal supply shortage.

South Korea heavily relies on China for urea water solution, as 97.6 percent of its imports came from China in the first nine months of this year.

Authorities warned that urea water solution traders, including importer and retailers, could face punishment if the amount of the material in storage exceeds 10 percent compared to the average of what they had in possession in the same month last year.

The team comprised of authorities from the environment and industry ministries, the Fair Trade Commission, the National Tax Service and the Korea Customs Service is expected to inspect over 10,000 urea water solution-dealing firms across the country.

The environment ministry, which leads the inter-agency team, said it plans to thoroughly monitor the national urea water solution retail network in order to strengthen crackdowns on illegal activities.

Despite the government warning, attempts to profiteer from the urea water solution crunch appeared rampant over the internet, with dozens of deals spotted on online sites and used goods trading apps offering the solution at steep prices.

Reports of overcharging and scams at gas stations involving urea water solution have also appeared online, with a social media user claiming that a gas station he went to would not sell the ingredient unless the purchaser agreed to buy gas together.

Seoul police authorities have reportedly sent out notices to urea water dealers in the capital informing them of means to prevent scams surrounding the ingredient.