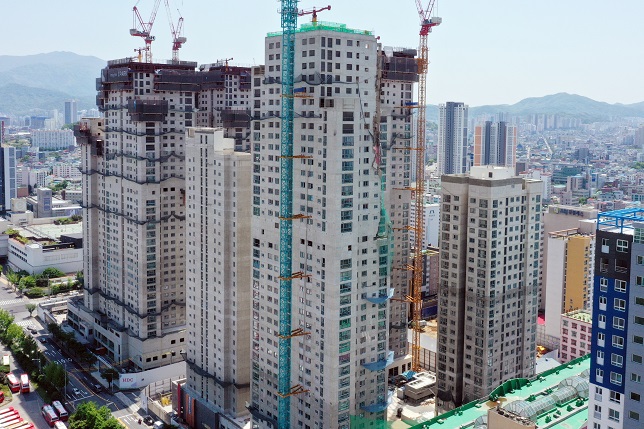 This file photo shows an apartment building that partially collapsed during construction in the southwestern city of Gwangju on Jan 11, 2022, leaving six workers dead and another injured. (Yonhap)

GWANGJU, June 4 (Korea Bizwire) — Police transferred a top official of HDC Hyundai Development Co. to the prosecution Friday, wrapping up an investigation into the fatal collapse of an apartment building under construction in the southwestern city of Gwangju in January.

Outer wall structures of the 39-story building in the city, 330 kilometers south of Seoul, crumbled on Jan 11, leaving six workers dead and another injured. Government probes blamed poor safety management and lax supervision by HDC, the project’s contractor, for the accident.

The Gwangju Metropolitan Police Agency forwarded Ha Won-gi, HDC executive vice president and head of the business construction division, to the prosecution on charges of professional negligence resulting in death and violations of construction and housing acts. He was not detained.

The police said Ha was found to have not placed sufficient numbers of construction quality managers at the site.

Six quality managers were assigned, but five of them held other duties concurrently and only one person was responsible for quality control, the police said.

Ha denied his responsibility, saying he only followed company rules, according to the police.

During the five-month investigation, the police have sent a total of 16 suspects, including Ha, and four companies, including HDC and its subcontractors, to the prosecution. Of them, six have been arrested.

The police also booked five people for suspected irregularities involved in the project and will continue to look into possible corruption in the process of construction approval and subcontract relations, they said.