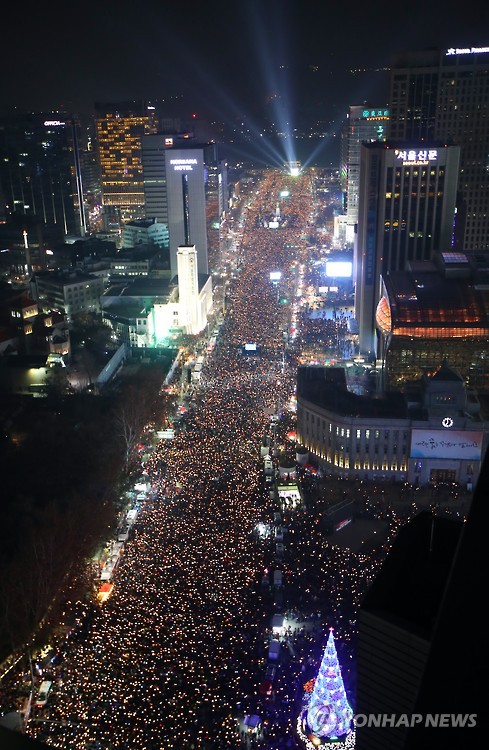 Over 2.3 million people (organizer estimate) gathered across the country on December 3 calling for resignation of President Park Geun-hye. (image: Yonhap)

SEOUL, Dec. 5 (Korea Bizwire) – The ongoing political crisis surrounding the embattled South Korean president is incapacitating government offices and businesses that are facing allegations of involvement in the scandal, with officials now struggling to establish economic policies and business strategies for 2017, which is only a month away.

The Ministry of Strategy and Finance is among the branches most badly hurt, and was recently subject to a search and seizure operation from the prosecution. The ministry’s newly appointed minister has had his approval pending for over a month now, accompanied by strong resistance from opposition parties and the uncertain future of President Park Geun-hye.

In the meantime, the First Vice Minister Choi Sang-mok faces allegations that he may have been involved in Choi Soon-sil gate. He was summoned by the prosecutor’s office to testify of his alleged connections in establishing the Mir Foundation, a foundation controlled by Choi Soon-sil.

In addition to matters surrounding the ministry’s personnel, economic policies for 2017 are also murky, with officials struggling to bring plans into focus amid the ongoing investigations. The ministry is unlikely to introduce policies that will probably never see the light of day, with growing suspicions of Choi Soon-sil’s influence over the president’s economic viewpoints, her policies, and even election pledges.

Major corporations are likewise finding it difficult to establish business plans and growth strategies for 2017.

More than a few key corporate figures from companies including Samsung, Lotte, POSCO, and SK have already been investigated by the authorities over questionable donations made to Mir Foundation and K-Sports Foundation, another foundation controlled by Choi Soon-sil.

Leaders from nine major corporations – Samsung Electronics, Hyundai Motor Company, SK, LG, Lotte, Hanwha, Hanjin, CJ, and GS – will make an historic appearance together Tuesday for a hearing held at the national assembly with the parliamentary special committee over the extent of their involvement in the scandal.

With both the government and businesses busy putting out fires, the Korean economy is still struggling to build momentum.

The youth unemployment rate reached 8.5 percent in October, the highest since 1999 in the aftermath of the 1997 Asian Financial Crisis; real household income by households dropped for the fifth consecutive quarter; and total household debt exceeded $1.1 trillion as of the end of the third quarter, pressuring individuals to further cut down on their consumption.