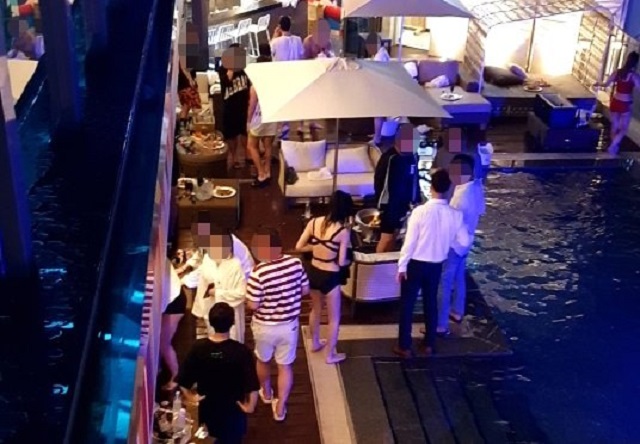 This photo, provided by the Gangneung city government, shows the scene of a pool party at a hotel in Gangneung on July 31, 2021.

SEOUL, Aug. 2 (Korea Bizwire) — Virus or not, a growing number of people have been caught attending parties in violation of COVID-19 rules, with some business owners opting to open and pay a fine than not open at all.

South Korea has experienced a surge in COVID-19 infections in recent weeks, with more than 1,000 new cases daily since July 7.

To contain the outbreak, which has been blamed on increased travel during the summer vacation season and the spread of the highly contagious delta variant, authorities have placed the capital area under the toughest Level 4 social distancing measures and most of the rest of the country under the next highest Level 3.

Still, in the eastern coastal city of Gangneung, 237 kilometers east of Seoul, police walked in on a hotel pool party attended by dozens of people Saturday.

The city government of Gangneung said the party broke multiple COVID-19 rules, including a mandate on wearing masks, keeping a distance between people and other restrictions that apply to swimming pools.

The hotel was ordered to suspend operations for 10 days for violating the Infectious Disease Control and Prevention Act, according to the city government.

On Friday, a karaoke bar in Busan, 453 kilometers southeast of Seoul, entertained 15 guests only five days after it was caught doing business with its door locked, police said.

Under Level 3, karaoke and nightlife establishments are required to close at 10 p.m. and all private gatherings of more than four people are banned.

The first time, police said they heard the outdoor unit of the air conditioner running, while the second time they were tipped off. 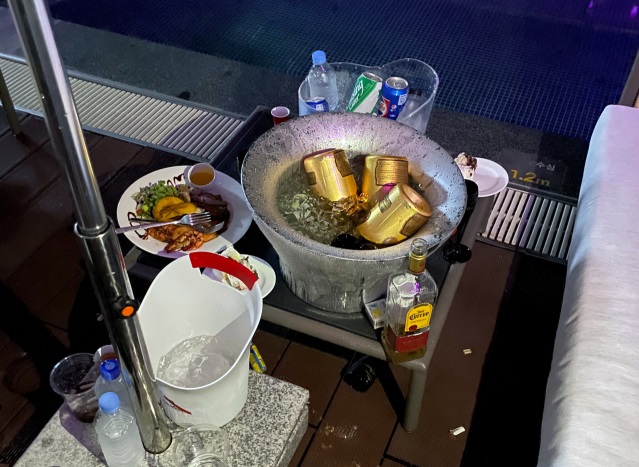 This photo, provided by the Gangneung city government, shows the scene of a pool party at a hotel in Gangneung on July 31, 2021.

Health authorities said they will charge the business for damages in the event the participants later test positive for COVID-19 and exclude it from receiving government compensation for losses caused by COVID-19 protocols.

But some called for stronger punishment, saying business owners will continue to accept customers if they believe their profit will outweigh the fines.

These events offered guests a chance to eat, drink and meet new people in groups and settings that were in violation of COVID-19 rules.

“I had so much fun at dinner. The best part was the unlimited beer,” one person wrote on an online message board.

“I was nervous because I was on my own, but I had a great time with the young people there,” wrote another person.