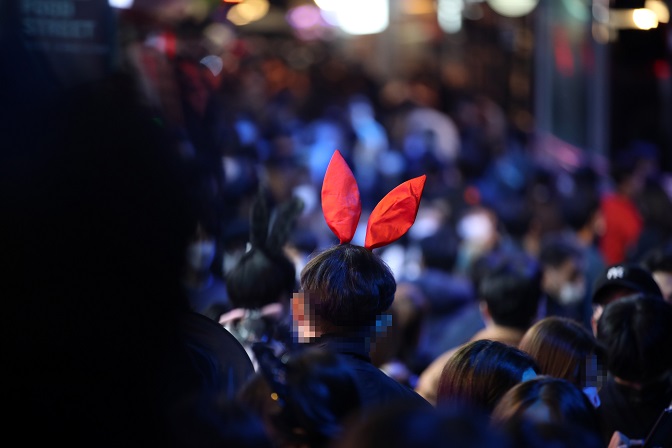 Itaewon, a popular nightlife district in central Seoul, is crowded with people on Oct. 31, 2020. (Yonhap)

While most major clubs in the popular areas of Hongdae, Itaewon and Gangnam were closed as part of precautionary measures, people instead flocked to bars in the areas to enjoy the weekend.

Most bars were full at around 9 p.m., with streets getting crowded with people taking photos and queuing to get into bars.

“I’ve been waiting for Halloween so much. There aren’t many festivals you can enjoy on the street with strangers,” a 22-year-old wearing a costume said, “COVID-19 is scary but we can be careful and wear masks.”

But some, such as shop owners and residents, appeared vigilant against the infectious virus.

“It seems there are three to four times more people than usual,” said a 30-year-old resident surnamed Park. “If infections against spread in Itaewon, the local economy will collapse and residents will feel tense walking outside.”

Itaewon was at the center of a mass transmission in May after infections spread at nightclubs during a holiday weekend.

“I considered closing but decided to open since it has been really tough. I’m planning to strictly stick to the safety guidelines,” a shop owner said. 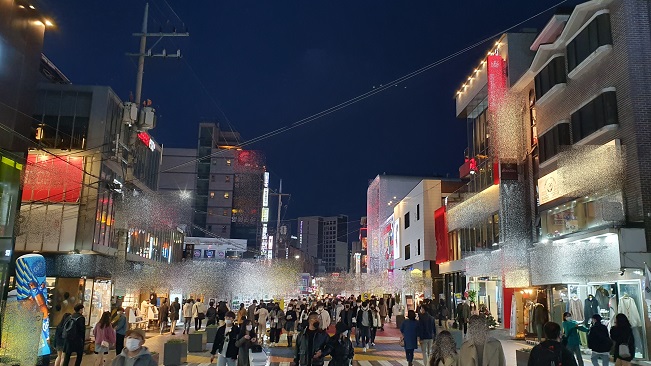 Hongdae, a popular neighborhood in western Seoul, is crowded on Oct. 31, 2020. (Yonhap)

Hongdae, in western Seoul, was also bustling with crowds. While there were not many people wearing costumes compared with Itaewon, many were out for weekend dinners.

“I think it has been the most crowded day in Hongdae in months,” a taxi driver said.

But streets with popular clubs were unusually quiet as they had closed for the weekend. Some bars were nearly empty, with only five people filling a 20-table shop.

Gangnam in southern Seoul was also crowded with weekend crowds.

A long line formed in front of a store with jack-o-lanterns and a skull-shaped decoration.

“It’s not that we are holding special events celebrating Halloween. We’re trying to be careful with infection,” a shop employee said.

The South Korean government has been on alert over the new coronavirus spreading among partygoers on Halloween weekend.

Chung also asked young people to refrain from organizing Halloween gatherings at nightclubs, as well as to wear masks and maintain personal hygiene.

Many popular clubs in Seoul’s Itaewon, Hongdae and Gangnam neighborhoods decided to close this Halloween weekend to prevent the spread of the coronavirus.

The Seoul metropolitan government said a total of 85 entertainment facilities expressed their intention to close over Halloween.

South Korea added 127 more COVID-19 cases on Saturday, raising its total caseload to 26,511, according to the Korea Disease Control and Prevention Agency.

It marked the fourth straight day of triple-digit cases following 103 new cases reported on Wednesday, 125 on Thursday and 114 on Friday.